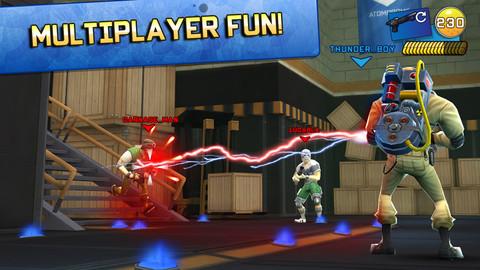 If there’s something strange in the neighborhood, who you gonna call? The Men in Black, maybe. Digital Legends’ latest update for Respawnables makes it possible to utilize weapons and avatars from Ghostbusters and Men in Black in-game. We already know that it’s a bad idea to cross the streams, but what about time streams…?

Next time you indulge in Digital Legends’ popular third-person shooter, you can grab “Egon’s Ghostbusters Kit,” and/or Men in Black’s “Special Agent Gear.” The Ghostbusters Kit includes a Proton Gun and a pair of the now-famous Ghostbusters coveralls (perfect protection against ectoplasm and light radioactive spills). The MIB kit is packed with a Special Agent Gear, as well as a Tri Barrel Plasma Rifle or Noisy Cricket.

Other updates include a new level, Snow Village, and the ability to connect to the game via Facebook in order to hook up with friends or invite them to play. There are also lots of little updates that improve connectivity and the like—but what matters most is that you can point a Proton Gun at someone and make them explode like so many tons of ghostly marshmallow goo.

Free Games and Sales: Ultima, The Journey Down and more!