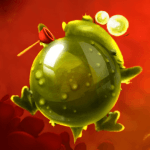 Did you love Rayman Jungle Run? OF COURSE YOU DID! The game was a brilliant one-button rethinking of what platformers could be on mobile, and managed to snag the #2 spot in our Best iPhone Games of 2012 list (nipping at the heels of the equally fantastic Super Hexagon). And now, with the latest Rayman Legends burning up the console gaming charts, Ubisoft is ready to fire their second volley in the world of Rayman mobile: Rayman Fiesta Run.

Announced by Ubisoft this morning, Rayman Fiesta Run will be adding a muy caliente flavor to the proceedings, in which players will – according to the press release – “lunge for cocktail umbrellas, leap on limes and punch piñatas in this playful, colorful musical adventure.”