Home / News / Presenting NAVE, a game only playable on a single arcade cabinet

Presenting NAVE, a game only playable on a single arcade cabinet 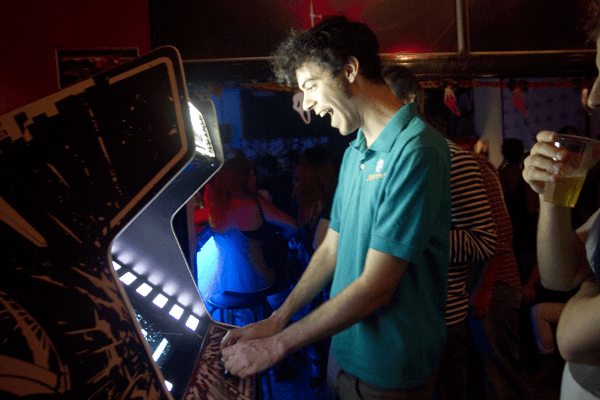 We tend to take it for granted that pretty much every game we want to play is right at our fingertips. Sometimes we have to buy a console or download a game through less-than-legal means, but those are very minor barriers. Videogamo, a two-man studio based in Argentina, felt an urge to develop a title that wasn’t so easy to track down or purchase. To do this, they created NAVE, a game that’s only playable on a single, touring arcade cabinet.

NAVE is an old school space shooter with a pretty unique mechanic: as you progress, your spaceship continues to grow in size. It’s an accessible enough concept, but it also looks to provide a level of challenge comparable to the unforgiving arcade games of yore. Speaking of the good old days, something tells me retro arcade enthusiasts will appreciate Videogamo’s feelings towards the venerable arcade cabinet. As they detailed in a press release:

“We decided to present NAVE in a classic arcade cabinet because we believe it’s one of the best ways of playing,” they stated. “First, the player is standing and near the screen. That predisposes him in a special way. Second, the game becomes more physical, stronger, and the player can discharge all the tension on the machine. And third, it’s ideal for short session games, where players who are waiting for their turn can watch what the one who’s playing is doing, learn from that and try to surpass him.”

Making a game that’s playable on a single cabinet is a quirky idea, but Videogamo is no stranger to odd gaming endeavors. In the past they’ve worked on “music-video” games, which are music videos with interactive elements woven in. You can check both of those out on their website, along with the other projects they currently have in the works. From the sounds of it, they plan on developing a three-player beat ’em up arcade game, as well as a cabinet featuring several two-player games.

Currently, NAVE has shown up at a few parties in the developer’s town. The plan, though, is to travel through the US, Europe, Asia, and other countries with the cabinet in tow. It’s sure to be a costly endeavor—and Videogamo didn’t mention in their press release how they plan to fund it—but here’s to hoping there are enough retro enthusiasts out there with big enough wallets to help them out on this noble, wacky mission.

Should we catch wind of any specific tour dates or details about NAVE‘s journey across the world, we’ll be sure to let you know! In the meantime, here’s a video playlist of behind the scenes footage about the game. It’s not in English, but it’s easy enough to pick up on what’s happening.

10000000 matches/runs/RPGs its way over to Android and Linux