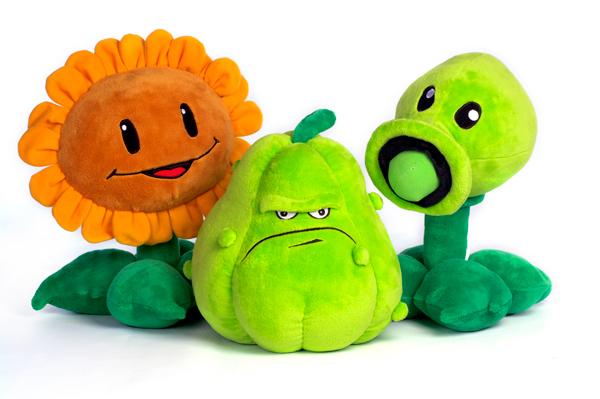 You can’t walk five steps in a retail store without seeing Rovio’s Angry Birds franchise on multiple shelves. There are t-shirts, a card game, iPhone covers, and plush toys from five inches to over a foot in diameter. You can even eat Angry Birds gummy candy. No longer content at watching Rovio extend their brand (while earning millions of dollars in the process), Bejeweled and Plants vs. Zombies creator PopCap is looking to enter the merchandising fray.

This morning, PopCap announced at least six major licensing deals in order to extend their Plants vs. Zombies franchise into the physical world. Among the group of future manufacturers is Bioworld, Jazwares, Funco!, and Walls360.

Ever wanted to show your appreciation for your lovable leafy warriors? Have soft spot for the world’s most dim-witted brain eaters? Soon, like with Angry Birds, you’ll be able to find all the merchandise you could ever want.

From their six major merchandising deals alone, you can expect to see Plants vs. Zombies gear just about everywhere. Plush toys, figurines, headphones, wall clings, apparel, and calendars are all on the way. Want to extend your intimacy with the series even further? Plants vs. Zombies boxers are well underway, too.

Whether you love or hate the infestation of casual game-branded merchandise in stores today, there is one universal good that can come from this: a Plants vs. Zombies sequel is likely in the works. PopCap’s John Vechay has jokingly admitted that a sequel to the 2009 hit will be created sometime in the next decade, but what better time to release a new title than when your brand is recognizable all over retailers worldwide? We wouldn’t be surprised to hear more news regarding a sequel sometime soon.

PopCap also plans to bring their other franchises, including Bejeweled, into merchandising opportunities in early 2013. While the Bejeweled jewels aren’t quite as full of personality as the Plants vs. Zombies characters, it’ll be interesting to see how PopCap’s strategy pays off.