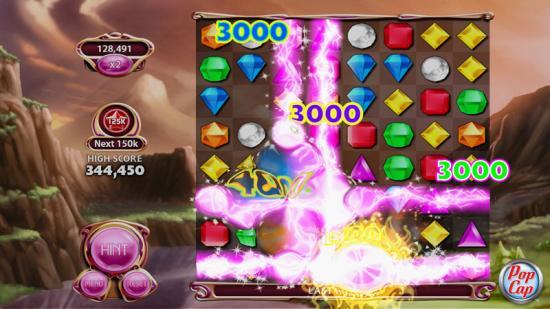 PopCap Games has just released Bejeweled Blitz for the PC. Originally released for Facebook and later ported to the iPhone, the full PC version of Bejeweled Blitz offers an enhanced presentation over its earlier counterparts. Improved sounds and graphics, a full-screen play mode, and dozens of new achievements round out this new offering.

Like its predecessors, Bejeweled Blitz for the PC offers a 60 second take on the Bejeweled experience in which you’ll compete against your friends for a high score. Players will be able to log into Facebook from inside the game, allowing them to transfer their score data between versions and keep apprised of their friends’ scores regardless of whether they’re playing on the Facebook, iPhone or PC.

“Bejeweled Blitz is 10 years of the most popular puzzle game of the century packed into a minute-long experience,” said Jason Kapalka, co-founder and chief creative officer at PopCap Games. “It’s the purest form of Bejeweled that we’ve ever concocted, factoring in everything PopCap has learned from a decade of development and feedback from millions of fans. By adding social and competitive elements and a time limit, we’ve distilled Bejeweled down to its essence with Bejeweled Blitz, and the new PC downloadable version makes the game available in the largest, most vibrant form factor yet by far. For some players this could be the version that takes their Bejeweled Blitz game to new heights.”

Expect our review soon. In the meantime download a free trial of Bejeweled Blitz, write a review, share your tips, and discuss in our forum. Be sure to check out the “New Games” module on the right side of home page to stay to to date on all new casual games released online.

VentureBeat: Could Zynga really be worth $5 billion?