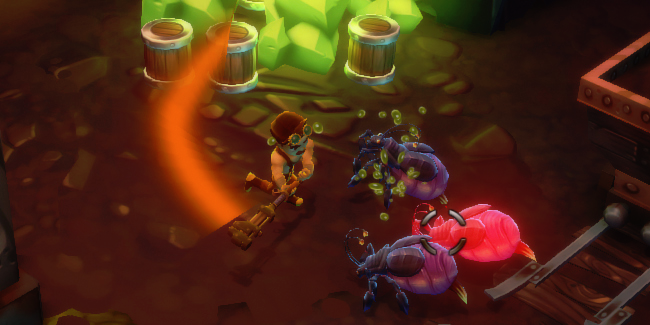 There are some game developers that consistently churn out pure gaming gold, while others tend to be a little hit or miss. In our experience, Tasty Poison Games falls into this latter category. We fell in love with Pocket RPG, had our hearts broken by Neon Shadow, and now, with Tom Sparks and the Quakes of Ruin, we’re learning to love once more.

A top-down action game destined for Steam (you can upvote it on Greenlight here), Tom Sparks sets players on the loose as a steampunk hero trying to figure out why his world is being ravaged by mysterious earthquakes. The developers are citing Ratchet and Clank as a gameplay influence, and it’s not hard to see why. Players will be exposed to a variety of weapons, each of which will be unlocked with the currency you collect by smashing things with a giant wrench… and that currency looks an awful lot like bolts.

With only 8 days left to go on Kickstarter at the time of this writing, and just $2,060 of its $50,000 target raised, it seems as though Tom Sparks and the Quakes of Ruin may well fall short of a successful campaign – and that’s a real shame. But you can do your part to change its fate by pledging today.

Prefer to try before you buy? There’s an alpha demo available from the project page, and while the controls take a little getting used to (WASD + isometric = awkward adjustment), by the time you reach the end we bet you’ll be hooked.

And if you need a little extra incentive, how about this? There’s an 80’s sitcom theme in the credits and I’m not going to tell you which one. Go play it and find out for yourself.

Therian Saga is on the web, but don’t call it a web game

Mobile exclusives are the next big thing, says WSJ