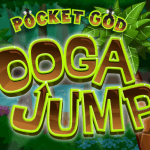 Bolt Creative, the folks behind a little app called Pocket God, are hard at work on a new game called Ooga Jump. If that name rings a bell to you, that’s because it’s also the title of a mini-game in Pocket God. This new game will be based on said mini-game, because if you’re going to copy someone, why not copy yourself?

Very little is known about Ooga Jump at the moment¸ but its predecessor was an endless ascension game a la Doodle Jump, so it’s probably safe to assume that’s what’s in store. In fact, Doodler of Doodle Jump fame made an appearance in the mini-game – maybe he (she?) will make another one here!

In any case, we’ll be sure to keep you informed of any future announcements from Bolt Creative, including anything about a release date.