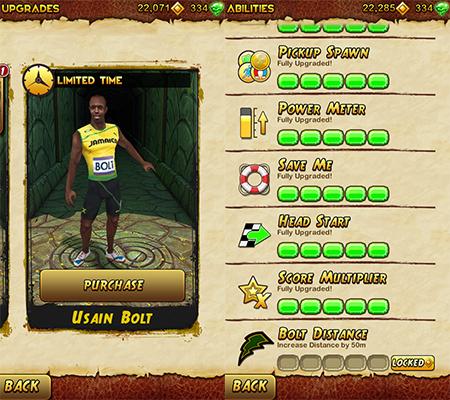 For a game like Temple Run 2 that’s all about running away as fast as you can from all sorts of evil constantly nipping at your heels, what better way to escape than to let you play as literally the world’s fastest man? Starting today, Temple Run 2 fans will be able to play as six-time Olympic Gold Medalist Usain Bolt, sporting his signature yellow and green running outfit in the game.

Usain Bolt is the very first branded character to be introduced into the world of Temple Run, which Imangi Studios feels is a strong indication of the true global reach of Temple Run as a franchise. And since the real-life Bolt is so incredibly fast, you’d better believe that the game version of bolt is going to bring some unique special powers to the table as well: specifically, the ability to boost ahead on the track and activate the classic coin magnet power-up at the very same time.

In regards to seeing his likeness pop up in the popular endless runner game, Usain Bolt had this to say: “I am a big fan of Temple Run. I travel all over the world and travel time gives me lots of opportunity to play Temple Run at airports or on car journeys. It’s exciting to see myself represented within a game I already play.”

Usain Bolt can be unlocked right now as a playable character in Temple Run 2 through an in-app purchase of $0.99.

New iOS Games Tonight: Knightmare Tower, An Alien with a Magnet and more!