Home / News / Play air hockey against your kitty with You vs. Cat for the iPad

Play air hockey against your kitty with You vs. Cat for the iPad 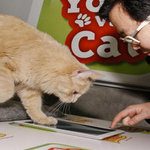 The cats have taken over our beds, sprawled out on our favorite sections of the couch, and bogarted those rare, tiny patches of sunlight that seep into our houses in the dead of winter. Now cats are getting into video games, starting with You vs. Cat for the iPad. Will this madness–this fuzzy, whiskered, pink-nosed madness–never end?

You vs. Cat is a digital game of “one-sided air hockey” that was assembled by Friskies. The human player flicks the puck across the screen, and the cat tries to block it with a paw swipe. According to the game’s world-wide leaderboard, the cats are winning with 2,091 against humanity’s 1,250.

Friskies knows its audience. Its parent company, Nestle Purina Petcare, has developed five other cat-oriented games for the iPhone and the iPad, though this is the first one that pits cat against “master.”

You vs. Cat is a free download, and is now available on the App Store. Try and grab your cat in between naps for a game or two. Today, feline air hockey. Tomorrow, a feline-specific version of Sonic the Hedgehog that challenges cats to chase after the rodent.