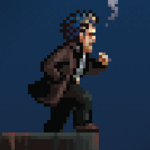 Ok, you’ve got my attention.

Stepping into the shoes of a shamed police detective turned private eye, Pixel Noir will task players with finding clues, interrogating suspects, and – since it’s also a JPRG at heart – engaging in turn-based battles with some unexpectedly gruesome foes.

Pixel Noir definitely piqued my curiosity, but it also has me thinking out loud: Is film noir the next big trend in games? Pixel Noir‘s existence seems to have come along right at the same time as the sci-fi gumshoe adventure Last Life, and both seem to have timed nicely with the release of Third Eye Crime.

Even Telltale’s been getting in on the action with The Wolf Among Us.

Pixel Noir will be wrapping up its Kickstarter later this week, and it could use your help to cross the finish line. Be sure to check out the official project page, and if you like what you see, send a pledge their way.

Call of Duty 4: Modern Warfare is 50% off, should you want to kick it old school

Mark of the Old Ones: Fun with Tentacles