Pitfall swings back onto mobile devices 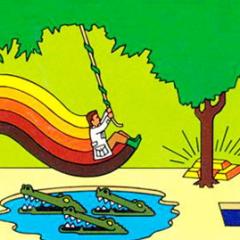 It was just a week or so ago when I wrote Six Atari franchises that should see a reboot, a list commemorating Atari’s 40th birthday. Unknown to everyone but my Editor-in-Chief, and I, this post was originally complete with seven titles. The secret franchise that I needed to drop? Pitfall – it’s by Activision, not Atari!  Because of this, I couldn’t help but find it ironic that Activision would be the first to answer my call for a reboot: it looks like a rebooted Pitfall is coming to mobile platforms.

It looks like Atari isn’t the only company celebrating a birthday, either. This year, Pitfall will be celebrating its 30th birthday since its inception on the Atari 2600. Since then, the series was bounced around several variants and platforms, before seemingly dying off in 2004 with Pitfall: The Lost Expedition. Nearly a decade later, it looks like good old Pitfall Harry is back to swing the vines.

Just a few months ago, we reported that Activision would be establishing a new mobile games studio in the UK, despite talking down to mobile back in 2010. Despite rumors of a Call of Duty title for mobile coming out of the Leeds-based studio, it looks like their first title will be grounded in Activision’s roots.

“We’ve been working on Pitfall since earlier in the year when we set up and it has been really good to revisit that and bring it to a modern audience,” said Activision’s Mark Brown.

We’re still without screenshots, greater information, and a release date, but one thing is certain: whether you’re a classic gamer or a new one, players worldwide will have a chance to venture through the jungle once again.

SQUIDS return in their very own comic book