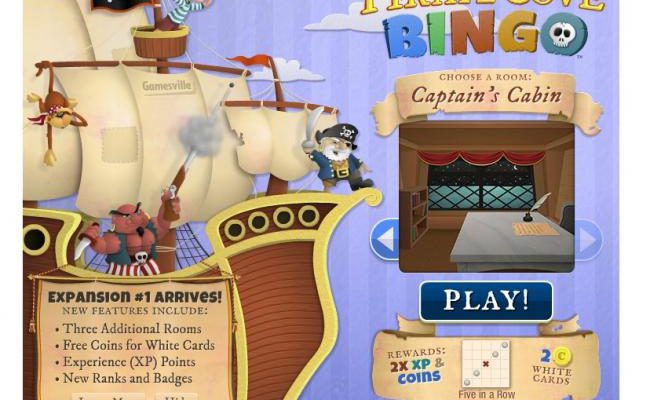 With all the hubbub about Zynga Bingo and Bingo Blitz lately, Facebook seems to be abuzz with bingo fever. But what about a Facebook bingo game where you can actually win real cash prizes?

We recently had a chance to pick the mind of Meredith LeDuc, Lycos’ Product Manager of Gamesville, about their Facebook release Pirate Cove Bingo. The game is only four months old and has already awarded more than 100 players with prizes of cold hard cash. Could you be next? Find out, as Meredith lets us know how it all works.

Unlike most Facebook games where people can spend real money but never get any in return, Pirate Cove Bingo awards real cash prizes to some of its lucky players. Tell us a bit about it.

People have been playing free games on Gamesville to win cash prizes since 1996, so when we started exploring opportunities on Facebook, it was a no brainer that we would implement that model there, too. Playing free games on Facebook is a popular pastime, but no one at the time was rewarding players with real cash prizes so we knew we were the ones to fill that need. When visitors play Pirate Cove Bingo, they receive five gold cards every day. When players get a bingo on a Gold card, they’re automatically entered to win the daily $25 cash prize sweepstakes. It’s 100% possible to get a bingo on every Gold card you use; this means that players could potentially be entered five times, every day, to win the $25 cash prize. To date, over 100 players have each won $25! 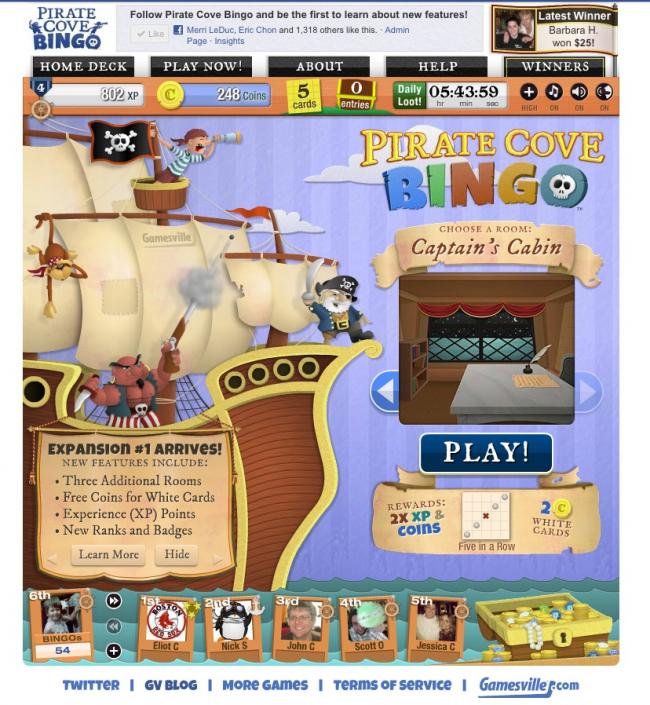 Pirate Cove Bingo isn’t the only bingo game on Facebook giving out cash prizes – Bingo by Ryzing has been developing a reputation for doing the very same. Who came first, and how does the prizing in these games differ?

Gamesville released Pirate Cove Bingo in November 2011. Bingo by Ryzing went live in January of 2012. Pirate Cove Bingo gives away $25 cash guaranteed to a lucky player every day of the week, for free, and is open to all residents of the United States aged 18 and over. Bingo by Ryzing gives away a variable amount of money to players who purchase Gold cards, are aged 21 or older, and is available in 35 out of the 50 United States.

Online gambling has long had a rocky history with the US legal system. Do cash prizes in an online bingo game fall under that definition? Or is there a way in which this varies under the law?

Generally gambling requires three components: a participant risking something of value, in a game of chance, to win a prize with clear financial value. Pirate Cove Bingo is not considered gambling because it is free to play and all prizes are won off Gold cards that cannot be purchased and are instead distributed equally, for free, to all players.

Has Lycos had been subject to any pressure in this regard, either for Pirate Cove Bingo or your similarly cash-prize themed Gamesville website?

Gamesville games are free to play. Since players never wager, bet, or risk their hard-earned money playing Gamesville games–they are not gambling. Our players are having a good time playing free games, chatting with friends, and winning prizes. 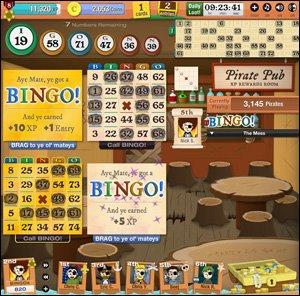 With so many casino-style games hitting Facebook recently, are you surprised that more companies haven’t started giving away real cash prizes?

Not really. As previously mentioned, a company needs to be mindful of how they structure their games to avoid violating gambling laws; they need to budget for the prizes being awarded; and an infrastructure to distribute those prizes.Those can be high bars to jump. Of course, we’ve honed this fun to a science over the last 15 years and expect more companies to try and start joining the party.

We’re really excited about this release. There are a lot of new components but my personal favorite feature is that players now earn experience points, which unlock new ranks and new rooms that feature new bingo patterns. Plus players can brag to their friends on how great they are doing in the game — and who doesn’t love a little friendly competition?

On Facebook, Pirate Cove Bingo will see many more enhancements over the next several months which we know our players will love.Our focus in 2012 is on growing the games we’re great at, like bingo, and on creating fun new games, like the ones we’re releasing on gamesville.comthis year. I’m excited for the many fun experiences, prizes and surprises we have lined up, and we’ll be sharing more details on those as the year rolls on.