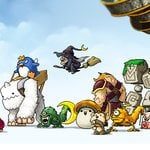 Next time someone tells you that PC gaming is dead, make sure to flick them on the nose with your thumb and forefinger. Alternatively, you can point them at a recent report from PC Gaming Alliance (PCGA) that clearly outlines the robust growth of computer gaming. In 2011, the industry recorded a global record of $18.6 billion. That’s up 15% over 2010. Obviously, it’s in the best interests of PCGA to publish a report that says “Everything is A-OK with PC gaming,” but there’s no denying that the platform is swarming with activity.

The annual research report, titled “Horizons,” revealed that China is at the root of PC gaming’s boom. The country’s PC habits are growing at nearly twice the rate of the global market, with $6 billion and a 27% increase in revenue. By comparison, the US, the UK, Korea, Japan, and Germany had a 11% increase in revenue.

PCGA’s report notes that Zynga and Nexon (the creators of Maple Story) are the currently most successful developers in the PC market, with both companies boasting approximately $1.1 billion in revenue. Zynga, along with Germany’s Bigpoint, are credited for popularizing the free-to-play formula in North America and Europe.

PCGA predicts that that the industry will grow to $25.5 billion by 2015. That remains to be seen, but either way, there’s ample evidence that the PC market is much healthier than many console owners believe.

The third iPad: Everything gamers need to know