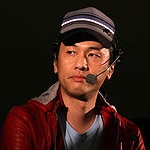 The name Masaya Matsuura may not ring any bells to the common man, but if you’ve ever enjoyed a music game, you owe him a big thank you. His PlayStation game PaRappa the Rapper created a formula that nearly every successive rhythm game followed. Now Matsuura is back, and he’s ready to break that mold.

In conjunction with OneBigGame, the non-profit publisher of video games dedicated to charity fundraising, Matsuura has just announced the upcoming release of his new iPhone music game WINtA.

“We couldn’t be happier with WINtA as the second game to come out under our fundraising label,” said Martin de Ronde, director, OneBigGame. “We feel Matsuura-san has come up with a great concept for OneBigGame, and we are convinced that fans of his earlier works as well as fans of music games in general will be pleasantly surprised when they all get a chance to experience WINtA later this year.”

In the spirit of charity, Matsuura and his studio NanaOn-Sha will be developing the game pro bono. OneBigGame is committed to raising funds for solve problems affecting children, donating more than 80% of all donations to it’s charity partners Save the Children and Starlight Children’s Foundation. Their first game Chime, developed by Singstar creators Zoë Mode, was released on Xbox Live earlier this year.

“I am a big believer in creative collaborations and I am really pleased with the result that is WINtA,” says Matsuura. “Further down the line WINtA will also very much involve music artists, VJs and gamers around the world in this project. I can’t wait to see the creative vision that we have for WINtA finally become a reality later this year.”

Want to be notified the moment we post a full preview? Be sure to set a Gamezebo game alert on our WINtA overview page!

Carcassonne, Roll Out and more! New iPhone Games This Week