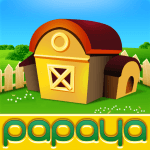 Who says you can’t make money on Android? Papaya Mobile, a mobile social networking platform for Android phones, announced that it has grown to 25 million users, up 940% since January 2010.

Of course, the majority of gamers for Papaya’s social mobile games are not paying a penny, but the ones who are are paying relatively more than what one would see on other social networks such as Facebook.

The average revenue per paying Papaya user is $22.60 a month and there have been 11 million transactions with Papaya’s virtual currency.

Papaya Mobile has a few advantages. One, it was early to invest in a social mobile gaming platform for Android. Google’s hands-off philosophy ensures there Papaya has nothing to worry about in terms of competing with its Google (as opposed to iOS, where Apple is competing with its own Game Center platform).

Two, Papaya Mobile is Chinese-based, which means it has pole position on the fast-growing Chinese Android market. Papaya is also available in the US and Europe, but surely the fact it is Chinese gives it an advantage over anyone competing in the Middle Kingdom (such as DeNA, OpenFeint, Zynga, etc).

Papaya’s other two assets are its funding ($20 million so far) and it’s name. The company is named after one of the coolest sounding tropical fruits in the world. Seriously, who in this world (especially in Asia) hates papayas. Even if you don’t like the taste of the fruit, you have to find the name “papaya” and the shape of the fruit amusing. At least I do.

Read more about Papaya Mobile’s business, less about how funny the word Papaya is, at VentureBeat.

Cities and Knights expansion coming to mobile versions of Catan