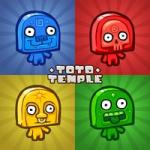 If you’ve ever jumped to new heights in Knightmare Tower or laid the smack down in Burrito Bison Revenge, you’re already familiar – and probably enamored – with the works of Montreal-based indie game makers Juicy Beast. Gamezebo had the good fortune to interview studio co-founder Yowan Langlais last summer, and when we did, talk quickly turned to Toto Temple – a neat little multiplayer game they’d created as part of the Toronto Game Jam (or TOJam for short).

Considering how fantastic the OUYA has been for multiplayer fun (hate on it all you want, but… Towerfall), their TOJam project seemed like a perfect fit for the device. Yowan didn’t disagree. And now, six months later, we have our confirmation: Toto Temple Deluxe is coming exclusively to OUYA.

The object of the game is fairly simple: get the goat, and keep it away from the other players as long as you can. With plenty of jumping and dashing, though, you can see how this would have the potential to be a frantic, crazy, Smash Bros-style good time.

The lesson of Flappy Bird for games developers, and it’s not what you think