Home / News / Out of the sewers and into your living room: Where’s My Water? merchandise is here

Out of the sewers and into your living room: Where’s My Water? merchandise is here 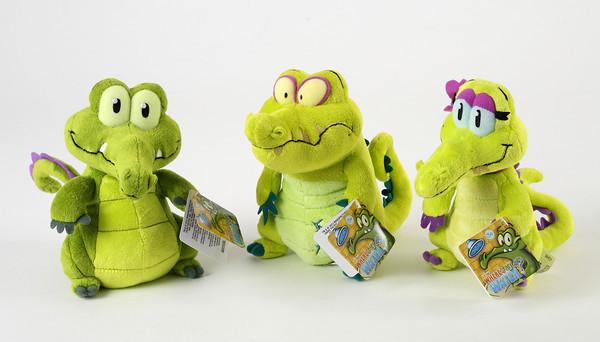 We’re at a point where it’s almost harder to find stores that don’t carry Angry Birds merchandise than the ones that do. Popcap just announced last month that their own Plants vs. Zombies plushes, figures, and t-shirts would be invading stores everywhere this year. Next up to bat in the war for casual gaming merchandise supremacy is Disney’s Where’s My Water?, slipping into mass retailers nationwide this June.

As expected for a company with Disney’s name on it, Where’s My Water? has scored some serious deals, including Hasbro, Toys “R” Us, and JAKKS Pacific/CDI. Fans of the series can expect everything from plushes, backpacks, shirts, and of course, bath towels.

Featuring a trio of crocodiles (Swampy, Allie, and Cranky), the Disney series has captivated the hearts of millions of mobile gamers. In addition to being the App Store’s 25 billionth download, Where’s My Water? has reached the number one spot on the App Store charts in over 80 different countries.

“Where’s My Water? has quickly become one of the most popular titles in mobile gaming history, making Swampy one of the most beloved characters ever born from a mobile franchise,” said Bart Decrem, senior vice president and general manager, Disney Mobile. “Launching a line of Disney merchandise just seven months after hitting the App Store is a testament to the cultural relevance Swampy and his friends have already achieved.”

For you ‘gatr enthusiasts out there too anxious to wait until your local stores carry Swampy and friends, Disney’s online store already has a Where’s My Water? merchandise section. Seeing how Disney has been a master of merchandising for over half a century, we can’t wait to see how Disney Mobile expands from here on out.

Has Activision changed its tune on mobile?