While I’m not usually one for sports, I’ve always been a bit of a sucker for football. I don’t follow a team or watch every Sunday, mind you, but if there’s a game on and I’m in the room, my eyes will probably be glued to the screen. And when there’s a big game like the Superbowl or Grey Cup (Canadians know what I’m talking about), I’m happy to carve an evening out of my schedule to watch.

Last night’s blowout was no exception.

The big story from last night, it would seem, is of the Broncos complete and utter meltdown that started with the first play of the game, and the absolute trouncing delivered to Payton and his boys by Seattle’s Legion of Boom (which includes former Grey Cup winner Brandon Browner, in case you Canadians are keeping score at home) that followed. Also, Percy Harvin.

But if you ask me, there’s a much bigger story from last night than utter annihilation of the Denver Broncos. It’s the story of technology’s growing relationship with events, how our love affair with gadgets perfectly blends with football, and, well… Flappy Bird.

But we’ll get to that in a moment.

There’s no denying the tremendous impact that social media has had on our culture. When a breaking news story happens, like yesterday’s untimely passing of Philip Seymour Hoffman, social media becomes a beacon for shared grief and emotions. If you were on Facebook or Twitter at all yesterday afternoon, I’m sure you saw more than a few heartbreaking comments on the story. It stirred an emotional reaction in many – and in this day and age, social media gives those seeking it an outlet for their emotions.

Similarly, though, social media can be used as the world’s largest peanut gallery. Awards shows like the Oscars and the Grammys are a great example of this. And, as it turns out, so was last night’s Super Bowl.

There were even tweets that became big stories from last night on their own. Need proof? Take a look at JC Penny’s attempt to be cute by tweeting about the game with mittens on, which instead looked like someone drunkenly hacked their account. Or cool factoids about how we were searching during the event, like this little tidbit from Google.

My Twitter feed, like yours, was an endless real-time running commentary on the game. It was like the world’s largest Mystery Science Theater 3000 audience, and I was loving every minute of it.

And I could love every minute of it, because football is a game that’s perfectly suited to accommodate the intertwining of our lives with modern technology.

If you’re not a fan of football, this is probably you’re biggest complaint. But in 2014, with all of the entertainment at your disposal between downs, it’s just not an excuse anymore. Case in point: Flappy Bird. 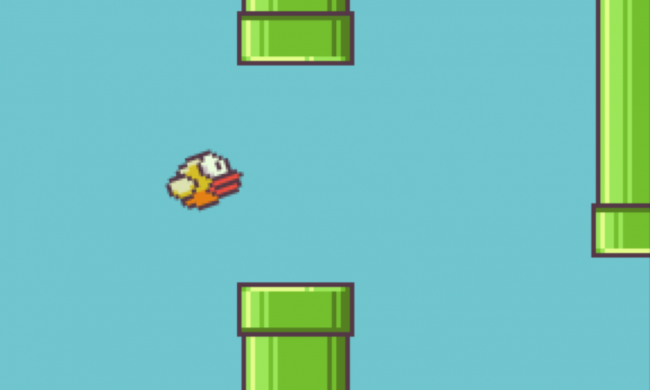 While I enjoyed my fair share of Twitter last night (and reddit’s r/funny community had some real gems on the game, too), I think I spent an equal amount of time between plays checking out some “plays” of my own. Flappy Bird, like the Seahawks defense, is brutally difficult. They are both birds, after all. But like Peyton and his pals, I just don’t know when to quit. (Although I suppose one could make the argument that the Broncos did know when to quit, and it was after their last game against the Patriots in Denver.)

All joking aside, the very nature of football let me enjoy every single play of the game and our modern technology-driven lifestyle without missing a beat. I was on Twitter. I played Flappy Bird. I even used my iPhone to hodge-podge together a photo comparing Seahawk’s cornerback Richard Sherman with Doug E. Doug (the former looks like the latter got a healthy dose of the Captain America serum). And I did it all without missing a moment of football.

But in the end, there’s really only one game from last night that really matters. And guess what? I got a new high score in it! 34, in case you’re curious. And when you get a new Flappy Bird high score while watching last night’s war crime against Denver, there’s only one proper way to commemorate it: with a tweet.