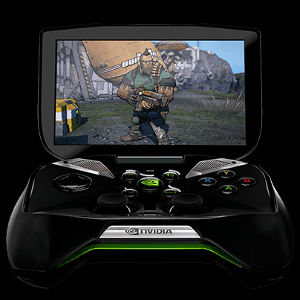 Nvidia, a company known best for its GPU manufacturing, has just announced a new, Android-based gaming console. It’s called Project Shield, and it’s got some pretty interesting tricks up its sleeve. Consider the gauntlet thrown, Ouya and GameStick.

But before we get into the nitty-gritty of the system’s capabilities, let’s address the form factor: Project Shield is a physical controller with a 5-inch, 1280 x 720 (HD!) touchscreen attached. The controller looks very similar to an Xbox 360 one, and features two analog sticks, a home button, a d-pad, and four action buttons. It also boasts built-in speakers, an HDMI port, a micro USB port, a micro SD slot, volume control, a back button, and a home button.

Project Shield will be powered by the new Tegra 4 chip, making it more powerful than the Ouya or GameStick. That alone could make it the most popular Android-based console on the market, but there’s no telling how much the chip will ultimately affect the price tag. If Nvidia manages to release it for $200 or less, though, they should be in a pretty good position.

This is especially true when you go down the list of what the system is capable of. Most notably, Project Shield can play Windows games running on a computer with an Nvidia GTX CPU. So if you’re properly equipped, you’ll have semi-portable access to your Steam library. And you’ll also be able to route video through the system, enabling you to play PC games on your TV. This isn’t the first device to allow such capabilities, but it has the potential to be one of the most convenient.

In some ways, Project Shield seems to be making good on the PS Vita’s original promise: to provide console-esque gaming on a mobile device. There are a few niggling points, of course. It’s still unclear just how much demand there is for Android-based gaming consoles, and a tepid consumer reaction will inevitably scare most developers away. It won’t be too long before we know for certain, as Project Shield is expected to ship in Q2 of this year, and the GameStick and Ouya are launching in April and March, respectively.