The United States leads the way when it comes to the consumption of digital content, a glimpse of the future can be had by looking at the East, and games, especially mobile games, are the current kings of digital media.

Those are just a few of the insights to be gained from a new joint study from App Annie and global research firm IHS, the first to be produced by the combined efforts of both organizations. The report takes a detailed look at trends across all kinds of digital content — including digital games, game apps, other kinds of mobile apps, movie and music streaming — and also identifies how the markets in different countries differ.

That number includes all types of games with digital distribution, such as online PC and browser-based titles, digital downloads on consoles and mobile game apps. But it’s the last of those subcategories that has been driving the overall growth. In seven key markets (the U.S., U.K., Germany, France, Russia, Japan and South Korea), spending on mobile games distributed through the iOS App Store or Google Play rose 2.9 times between 2012 and 2013, whereas spending on the entire digital games category in those same nations was up only slightly year-over-year.

Mobile games are already out in front in Japan, the only nation that saw more spending on game apps than all other types of digital games. The report points out that this happened despite the country’s former preference for browser-based online games, suggesting that players felt comfortable making a rapid switch to playing on smartphones and tablets. It’s the kind of disruption that companies like Zynga know only too well.

It’s also represented by the fact that a Japanese publisher, GungHo Online, topped all others in terms of worldwide iOS and Google Play spend in 2013, even coming in ahead of acknowledged mobile games giants like Supercell (Clash of Clans) and King (Candy Crush Saga, among other things). Yet the presence of EA in fourth place on the list is a sign that companies accustomed to making their money in other forms of gaming are quickly learning the importance of having mobile games among their product offerings. Interpreting this as a positive or negative depends on how one feels about things like the recent mobile version of Dungeon Keeper. 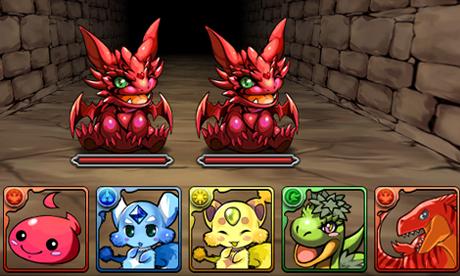 Puzzle & Dragons is one of GungHo’s biggest hits

The study also finds that games can impact the health and spending on other types of digital content. App Annie and IHS found that mobile games based on movies can be an effective way to keep the brand of a film or series in the minds of consumers. The movies don’t even have to be new releases, since games like FremantleMedia’s Jurassic Park Builderand Rovio’s Angry Birds Star Warsboth finished in the top five among movie game apps in terms of combined iOS and Android revenue last year.

So it should be all engines full ahead on mobile games, right? Not necessarily, as the report shines a brief light on a digital category that could be ever more primed for explosive growth: games downloaded to gaming consoles. Citing the arrival of the PS4 and Xbox One, IHS expects 41 percent of the games spend for consoles to be done digitally in less than three years. Given the media buzz about the end of physical games and high profile game designers like Cliff Bleszinski swearing off disc-based games, that might even be a conservative forecast.

Still, there are a lot more people in the world with smartphones and tablets than will ever own the latest gaming machines from Sony and Microsoft, so a bet on mobile games to continue to lead the way in overall revenue growth in 2014 seems like a smart one. The full digital content report can be downloaded from either App Annie or IHS.

Is Ticket to Ride’s train conductor in Broken Age?