Home / News / Ninja Heist Is a Super-Tough Arcade Platformer, Out Now on Android

Ninja Heist Is a Super-Tough Arcade Platformer, Out Now on Android 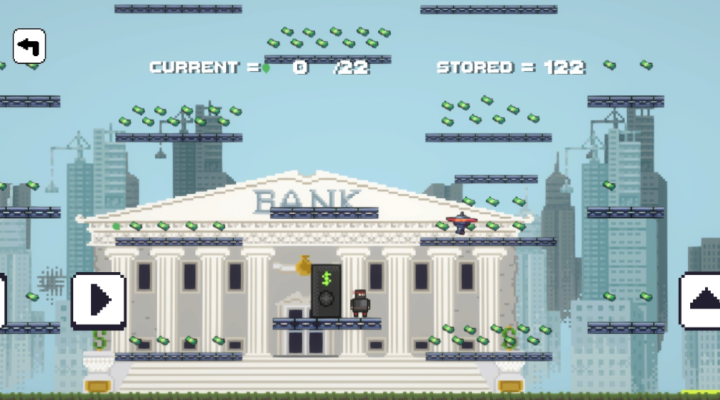 There’s not a lot of call for ninjas these days. Not since espionage went digital and assassinations became officially uncool.

But if you’re planning a heist, you could do a lot worse than add a ninja to your crew.

The aim in Ninja Heist is, of course, to steal stuff. More specifically, you need to steal coins and deposit them. All the while you must avoid a drone that’s hovering in pursuit.

Each stage takes place on a single-screen map, with girders that you can leap on to collect loot and evade the deadly drone.

The core gameplay will be familiar to pretty much anybody who has ever played a platform game. It harks right back to the early arcade days of Bubble Bobble, Rainbow Islands, and Lode Runner.

And like those games, Ninja Heist is as hard as nails. The drone is absolutely unrelenting in its quest to take you down. If you pause for a single second to catch your breath you’re toast.

Not only that, but if you run the wrong way, or leap onto the wrong platform, you’ll quickly find yourself out of options as the drone bears down on you with murderous intent.

Between attempts you can visit the in-game shop to spend your swag on boosts to the amount you can carry and the speed at which you move. You can also buy cosmetic changes to your larcenous little avatar.

There are currently two modes in Ninja Heist: The City, and Outer Space. They play very differently, due to gravitational physics. But they both require patience, concentration, and a supernatural degree of skill.

More are in the post, too, with Volcano, Oriental, and Dungeon all set to be added to the game in the near future. They’ll all introduce new skins, perks, and gameplay features.

In the meantime, you can get started with Ninja Heist’s existing two modes by downloading it for free right now on the Google Play Store.

An iOS version will arrive in due course.