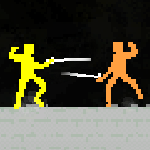 And they said it would never happen. Nidhogg, the two-player fencing game that’s been a staple of the indie gaming scene and an award winner since 2010, is finally being released to the public. On more than one occasion the press who’ve gone hands on have called this “the perfect game,” so if it wasn’t on your radar before, it should be.

Unlike earlier builds that have made the rounds at different events over the last few years, the public release of Nidhogg appears to feature a single player campaign. Those looking for the game’s touted multiplayer don’t have to worry, though; the release trailer below also showcases a tournament mode that supports 8 players.

We’ve heard endlessly good things about this one over the last few years, and can’t wait to see if it lives up to hype. Let’s find out together when the game hits Steam on January 13.