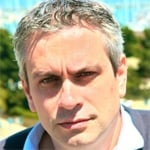 Earlier this month we here at Gamezebo were quick to speculate that rumors of a new Apple TV could mean Apple gaming in the living room. It looks like we may not be alone in this speculation as Neil Young, CEO of ngmoco, has let a few thoughts of his own slip on the subject in a recent interview with CNET.

Discussing a number of topics relevant to the Apple’s recent Worldwide Developer Conference, Young was quick to point out the future potential that the iPhone 4 may have in the living room, and how excited his company would be to be there;

“I think that a gyroscope-enabled, touch-sensitive device with a screen would make a wonderful interface for television and gaming on television,” he said. “…as a fan of Apple TV, I can’t wait for them to do something that lets my company’s apps run on the TV and gives me a control interface that’s not just movement based, but is also touch based.”

Young later goes on to discuss how the operating system name change could be a sign of things to come. “A TV or TV box running iPhone OS doesn’t make as much sense as one running iOS.”

For more of Young’s insight into recent happenings at Apple, be sure to read the complete interview on CNET.com.

Royal Envoy now available for Mac; other platforms to follow

Monkeyin’ Around, Cowabunga and more! Free iPhone Games for June 14, 2010