Home / News / New video takes gamers behind the scenes of Where’s My Water?

New video takes gamers behind the scenes of Where’s My Water? 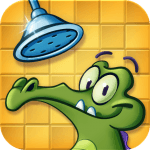 Sometimes when you absolutely love a game, you can’t wait to learn more about it. If that’s how you feel about Where’s My Water?, you’re in luck – Disney Mobile has released a neat little behind the scenes video that shows some of the development team talking about the design of and hopes for everyone’s favourite clean freak alligator.

There’s a lot of neat stuff crammed into this three minute clip, but the highlight has to be Senior Game Designer Tim Fitzrandolph stepping back to look at the big picture. “We’re trying to come up with new characters and new worlds that are worthy of Disney, but start as a game first.” He then later says “my secret hope is that someday you’ll be able to go and meet Swampy at Disneyland.”

Sounds like a lofty dream, but hey – we’re just glad they’re focused on creating fresh games worthy of the Disney name, rather than simply trying to cram Disney characters into crappy games.

Pocket God channels the spirit of Ghosts’n Goblins for Halloween