New Survey: “Bored” is just as good as “fun” for American mobile gamers 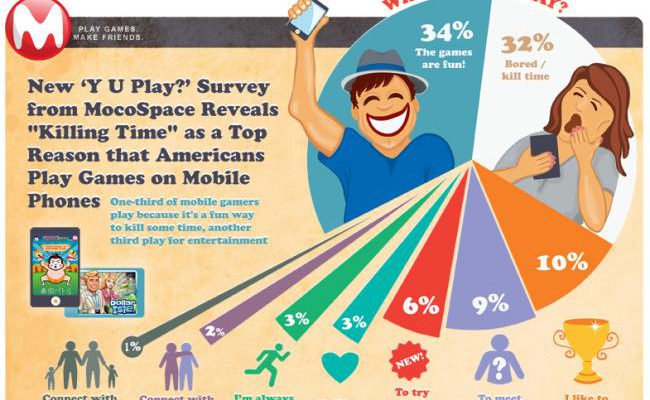 Since the explosion of mobile gaming in the last half-decade or so, it’s developed an image as a “quick fix” medium full of bite-sized experiences meant to pass the time more than occupy it intelligently. And while I’d be out of a job if the opposite weren’t also true, a recent survey by mobile game portal MocoSpace seems to prove that – as with all things – stereotypes exist for a reason.

In a poll taken in April by 10,000 of the site’s reported 25 million-strong user base, gamers where asked to give one answer only to the question of what drives them to their phones and tablets to play games. From among the respondents, it was a neardly-dead heat between those who are drawn to specific games because they are fun (34%), and those who play as a way to “kill time” (32%). MocoScape also touts the social strength of mobile gaming, citing user preference to game with new players over friends and family, and noting that people prefer meeting other gamers “five times” more than re-engaging with people they’ve already seen. 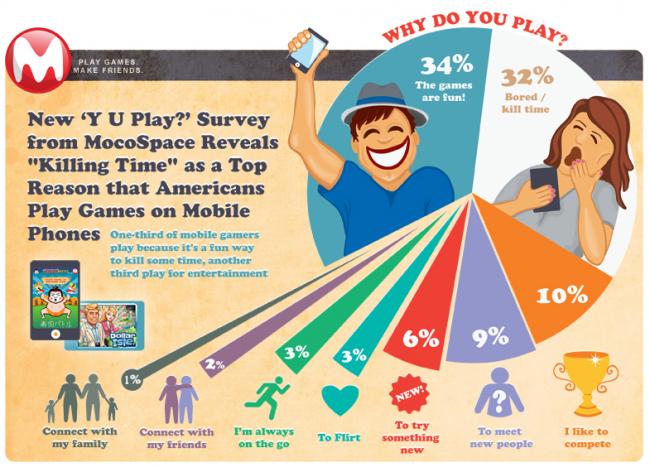 Personally, I take the latter statistic with a grain of salt, as both the MocoSpace network and the social gaming landscape as a whole are largely occupied by titles who actively incentivize the addition of more friends and new players to the game as a way to stave off the “punishment” of having to pay. If nothing else, though, this puts into hard numbers the truth that we’re only right now seeing the tip of the iceberg in the potential available in this space. For developers, there is a huge opportunity to advance the state of the medium by tapping more strongly into experiences that users can get passionate about. There’s certainly nothing wrong with passing a boring moment on a mobile title, but I’d love to see more users gravitate the medium for its fun factor – and think we increasingly will as dedicated consoles and handhelds lose their grasp on the gaming public.

Beyond what’s presented here, I’d also be curious to break down the spending habits of each of the two major groups. Do those who gravitate towards games due to boredom spend more per month than those who play because they enjoy the experience? For those that do enjoy the experience, is mobile their first “console” of choice, or do they come to it from a gaming background?

And while, like any survey, this needs to be scrutinized (for example, why did they separate the two choices? Can a game you play out of boredom not also be one you find extremely fun?), I’d love to hear your thoughts! What drives you to play games on your phone and tablet, and for that matter, do you feel like there are some truly engaging experiences out there for these devices that make up the new frontier of gaming?

DoubleDown goes all in: adds Texas Hold ‘Em to Facebook