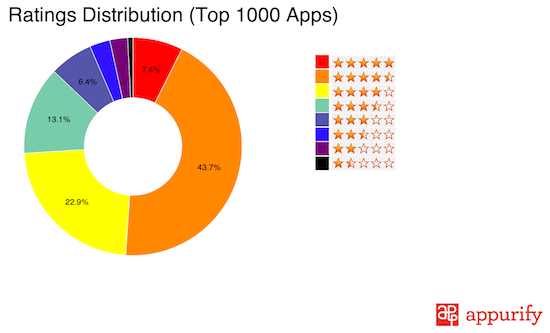 Who says that the proverbial gold star never meant anything? While getting a gold star on your spelling test back in the second grade might not hold that much weight to you now in your post-high school endeavors, earning similar gold stars are more important now than ever to mobile app developers, according to a recent report by Appurify. So for you mobile developers out there, keep on reading to see just how important those star ratings are to your app’s overall success in the App Store rankings; and to you App Store users and reviewers out there, keep these facts in mind the next time you plan on giving a 1-star rating to a game out of sheer frustration.

After performing a two-month study on the App Store’s Top 1,000 ranked apps (of which 389 were games), Appurify found that any app’s collective 1- to 5-star rating on the App Store has a direct correlation to its overall ranking on the Top 100 lists: a much greater correlation, in fact, than most developers would have previously imagined. To put this into a broader perspective, of the Top 1,000 ranked apps at the time of this study, 22.9% were rated 4-stars out of 5, and a whopping 43.7% were rated an impressive 4 ½-stars out of 5. Also significant is the finding that a 4 ½-star rated app has a much higher ranking potential than a 4-star rated app. Yes, half stars are important too!

The biggest takeaway from all of these new findings might seem like a bit of all-too obvious advice: make a great game that players won’t want to rate poorly! However, it turns out that over 50% of negative 1-star reviews on the App Store are typically in response to game crashes or other performance issues, rather than the actual content or substance of the application itself. So therefore, Appurify simply recommends that app developers withhold from releasing anything onto the App Store until all bugs and performance issues have been fully resolved, because even if your latest app is the best thing in the mobile world, there’s still no saving it from the rankings when an onslaught of frustrated gamers start bringing the ratings down because of avoidable performance issues.

There is a slight workaround for this, though, which comes in the form of pushing title updates onto the App Store, essentially replacing your older star rating for the time being, at least on a visual level for mobile browsers. Essentially, developers get a clean slate after an update is applied, and the new rating post-update is the first thing that users will see upon clicking on the app description page. Another interesting thing to note here is that the higher rated an application on the App Store is, then the more likely it is to receive additional user reviews and ratings; conversely, apps with much lower ratings were not usually given the time of day by users for additional reviews, which certainly did nothing to help improve their already lower-than-desired app ratings (consequently, more reviews per day equates to better rankings as well). 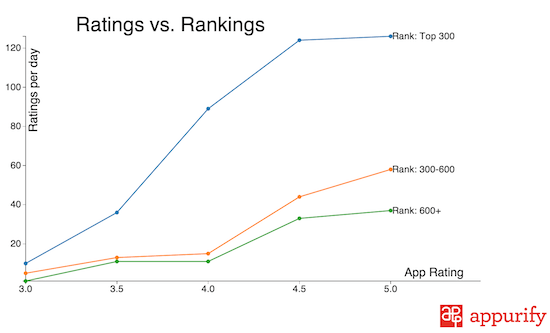 You can see the full findings of the recent study, including more in-depth examples of how this rating to ranking correlation really works, as well as more accompanying diagrams and figures over on the Appurify website.

GREE dishes on their success with live events in Modern War