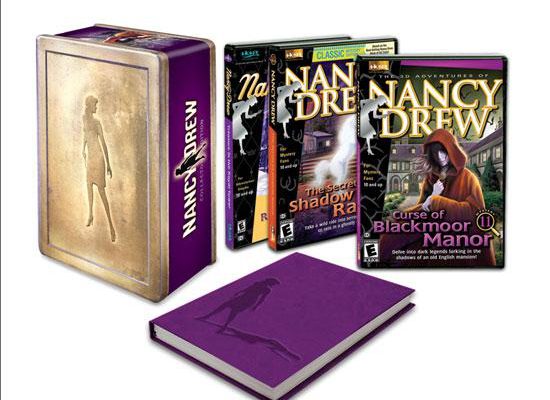 Nancy Drew fans have spoken, and Her Interactive has responded with Nancy Drew: Collector’s Edition Fan Favorites, a collectible tin featuring an exclusive journal and the top three games in the award-winning Nancy Drew PC Adventure series as voted on by the fans. Taking top honors are Treasure in a Royal Tower, The Secret of Shadow Ranch, andCurse of Blackmoor Manor. Launching just in time for the holidays, the games are packaged in a one-of-a-kind collector’s tin with a Nancy Drew-inspired journal. 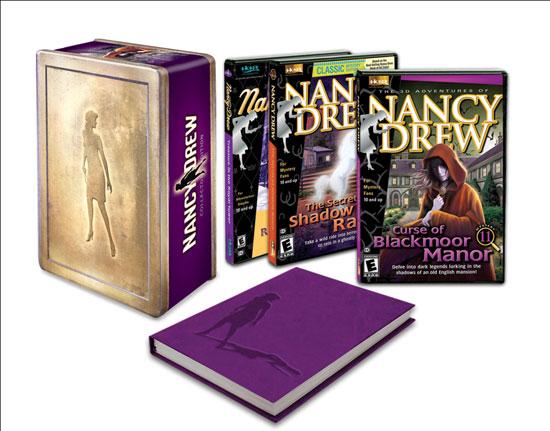 “We have the most avid fan base, so this is our gift to them – a collection of their favorite games combined with Nancy Drew memorabilia they will only find here,” says Megan Gaiser, CEO of Her Interactive. “For those who are new to the series, this is a perfect introduction. And, for our most loyal fans, it’s an opportunity to relive some beloved adventures.”

The Collector’s Edition tin features Nancy Drew artwork from the game covers and is the perfect place to keep games or hide clues. The collection also includes a specially designed journal complete with original, never-before-seen game concept sketches and pages for keeping track of clues.

Treasure in a Royal Tower is the fourth Nancy Drew game in the PC Adventure Series. As Nancy, you are trapped in a castle and discover clues to uncover a legendary secret left by Marie Antoinette.In the series’ tenth game, The Secret of Shadow Ranch, you take a ride into terror to rein in a ghostly secret.And in the eleventh game, Curse of Blackmoor Manor, you’ll delve into dark legends lurking in the shadows of an English mansion.

Nancy Drew: Collector’s Edition Fan Favorites is available exclusively online at www.HerInteractive.com and Amazon.com for a suggested retail price of $49.99, and quantities are limited. The games are playable on Windows PCs. Treasure in a Royal Tower, The Secret of Shadow Ranch, and Curse of Blackmoor Manor are rated E for Everyone by the ESRB.

PlayStation Phone: What we know so far