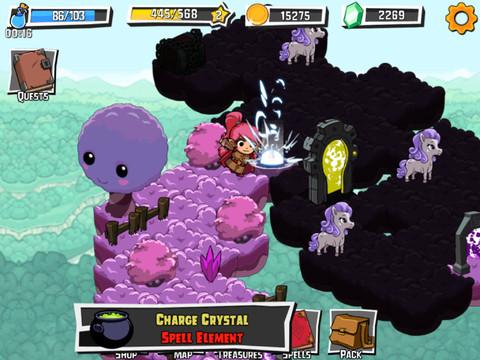 With the holiday season fast approaching, the release calendar is starting to get more and more jam-packed. It’s no different this Wednesday, with an assortment of top-shelf iOS releases arriving later tonight. From a title based on a well-known cartoon character to a quest of punchy proportions, there’s a little something for everyone.

For those unaware, Wednesday nights are kind of a big deal in the iOS space. It’s a magical time when developers far and wide release their games into the wild, all in the name of love. Or to make money, if you’re one of those cynics.

He-Man: The Most Powerful Game in the Universe

What do you call a Wednesday where a game featuring He-Man isn’t released? The answer is — cue drum roll — terrible! Wednesdays without He-Man games are downright terrible, and that’s why this is such a magical day to be alive. He-Man: The Most Powerful Game in the Universe is coming tonight, and it looks to be a pretty enjoyable side-scrolling action game. And before you have a panic attack, Skeletor will indeed be making an appearance.

Penny Arcade’s On the Rain-Slick Precipice of Darkness 3

Despite being markedly different from its predecessors, On the Rain-Slick Precipice of Darkness 3 turned out to be a fantastic RPG. It should be noted, though, that anyone who dislikes humor or gorgeous retro graphics probably won’t share my enthusiasm. I don’t know who out there fits that description, but I know I never want to meet them.

Punch Quest is what happens when you set out to make the coolest game ever. You run around and punch things! You ride on dinosaurs equipped with lasers! You rack up serious punch-combos! It’s truly a punch enthusiast’s dream, and the perfect chance to let off some steam without getting arrested.

In some ways, Totem Runner feels like a direct response to the recent influx of uninspired endless runners. Your running in the game will be of an endless variety, yes, but you’ll also be equipped with the ability to transform into different animals, including a rhino! And also a dragon, but I maintain that rhinos are way cooler than dragons.

Additionally, as the video above does a good job of conveying, it has a gorgeous visual style.

It’s not often you see the words “Square Enix” and “free” together in the same sentence, but it totally works here. Wizardlings is a free-to-play title from Square Enix that describes itself as a “casual tap adventure RPG.” I take that to mean it will feature lax mechanics that lend themselves well to mobile, but we’ll know for sure soon enough!