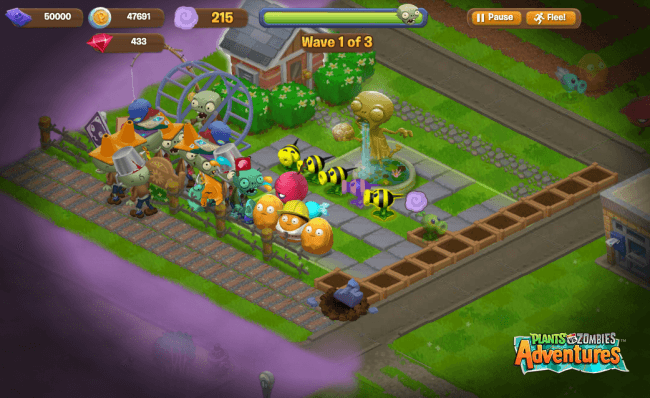 Just when you thought Plants vs. Zombies Adventures couldn’t possibly contain any more brains, a little thing called BrainBall comes along. The social reimagining of Popcap’s iconic “flower defense” game Plants vs. Zombies has been one of 2013’s most pleasant surprises, in taking the traditional gameplay of PvZ and seamlessly translating it into a Facebook medium that was both fresh and addictive. But now Popcap has begun to introduce an exciting new competitive game mode called BrainBall into the mix, which is sure to change the way you think about brains and where you should keep them forever!

So here’s how BrainBall works. First, you’ll be given a starting point of 5 brains, which you’ll be asked to strategically hide in the various houses and buildings that cover your town. Multiple brains can be hidden in the same structure, but it will be a sad, brain-less day for you if some organized band of zombies picks that location to launch their attack! After you’ve hidden your own set of brains, it’s time to go out and steal additional brains from other players in the game! Because what’s life without all the brainz you can muster, right?

In each weekly BrainBall tournament (new tournaments start every Tuesday at 10am PST), you’ll be able to gain access to the top leaderboards, in order to see which users are practically overflowing with brains that are just ripe for the stealing. But before you take action, you’ll need to train the different zombies who will be going in for the attack. This works in a similar fashion to how you grow plants in the game, with more powerful zombie types requiring longer wait times to be ready for battle.

After you pick your desired target from the leaderboards, you’ll be transported to their respective town, where you’ll then need to pick which building you think they’re housing the most brains in. One by one, you’ll be able to send in wave after wave of the zombies you had just been training earlier. Each trained zombie corresponds to one full wave of zombies, and you’ll be able to pick up little pockets of fog as they go along (the zombie version of sun), which you can use to speed up certain zombies, or freeze some defending plants. If the siege is successful, you’ll bring the looted brain(s) back to your town, to be added to your ever-growing collection as you prepare to defend from other players who are looking to do just the same thing! 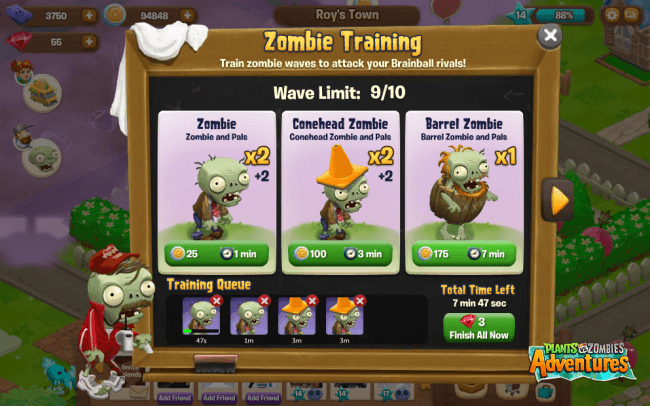 Oh, and the reward for remaining in the Top 5 on the BrainBall tournament leaderboard at the end of each week? You get to split a whopping 150 red gems, the game’s premium form of currency, which is certainly nothing to scoff at (or make grumbling zombie noises at)! After playing around with an early beta release of BrainBall before the full commercial update goes live today, it’s easy to see that Popcap has found the perfect way to add a dose of competitive gameplay into the PVZ Adventures universe that just makes complete sense in the context of the game. I, for one, know that I’ll never feel like my town is fully safe ever again, with all you greedy zombies out there being so persistent about taking my brainz! 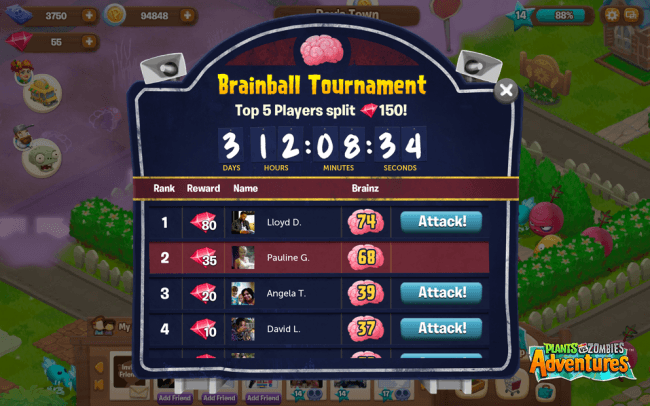 Plants vs. Zombies Adventures and the game’s new BrainBall mode can be played right now on Facebook.