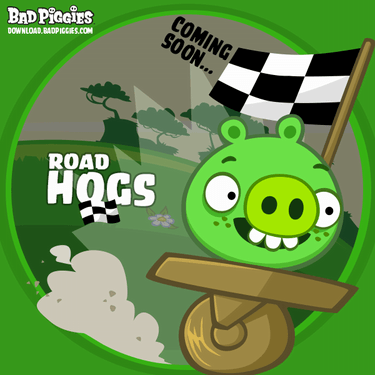 Despite lacking any sort of appendages, the green pigs of the Angry Birds universe sure are hyperactive. They covered a tremendous amount of ground in their own game Bad Piggies, and it sounds like they’ve still yet to tucker out: Rovio has revealed via Twitter that more content is coming soon to the game in the form of “Road Hogs.” What is Road Hogs, you ask? It appears to be a new mode of some sort, although that’s all we know at the moment.

But wait, there’s more! Rovio will also be adding 30 new Flight in the Night levels to the game. Last we checked, that equates to three times ten. And if you divide it by five, you end up with six. But we could sit here and try to impress you with our basic math skills all day, so let’s drop all that and instead just agree that a new mystery mode as well as 30 new levels coming to Bad Piggies is a very good thing.

And for those who never had the chance to play (my condolences), Bad Piggies is a physics-based puzzle game in which players construct makeshift vehicles out of various items—balloons, pieces of wood, etc.—and try to successfully make it to the end of various courses. While there’s an undeniable satisfaction that comes with finishing a level, it’s the moments where you crash horribly that prove to be the most enjoyable. Or maybe I just love destruction a little too much? Either way!

We’ll be sure to let you know once Rovio either announces more details about the new mode or surprises everyone by just randomly releasing it one day soon. Both are just as possible.