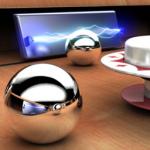 Have you ever wondered why some of the games you know and love undergo a sudden and unexpected name change? Well if that game has “pong,” in the title, you’d better believe it’s because Atari’s legal team has come knocking.

Fingerlab, the studio behind the multiplayer treat MultiPong, have just announced the name change this morning. When we asked them why, we were told “we have changed MultiPong to MultiBong because Atari said that we violated the trademark for PONG®.”

This isn’t the first time Atari has sprung into action to defend their intellectual property on the iPhone. Back when the App Store first launched, their legal team went on a bit of a crusade to put the kibosh on a variety of Breakout and Pong clones that were then littering the marketplace.

Still – even if the naming was similar, MultiPong‘s gameplay remains entirely intact in MultiBong, so gamers should have nothing to worry about. I might have chosen a new name that had less the do with illicit drug paraphernalia (it’s bound to turn off some consumers), but asides from that, we’re delighted to see that the game is still on the App Store. And for a limited time, you can get it for 99 cents to celebrate the name change.

What’s more, Fingerlab has told us that Android gamers will be getting their first taste of MultiBong soon – the game is expected to hit the Android Market for smartphones and tablets sometime this Christmas.