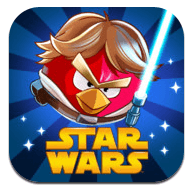 Hot off the heels of announcing new content for Bad Piggies, Rovio has gone and revealed that new levels are coming soon to Angry Birds Star Wars. Well actually, “revealed” may be too strong a word. They’ve acknowledged that the new levels are coming, but didn’t offer up too many details beyond that.

Thankfully, one can kind of glean what Rovio has cooking by looking at the teaser images they’ve been posting on Twitter. The first image shows the Millenium Falcon soaring through space, and the second shows the Millenium Falcon traveling through a dark tunnel. Both images were numbered—18 and 19, respectively—and the tweets for each were hashtagged with “#ComingSoon.” Though I’m no psychic, I believe that means this new content will be arriving in the near future. Just a theory.

The biggest mystery here, it would seem, is just how many levels players can expect to receive in this update. But what I’m personally more concerned with is if every single level will contain both Jar Jar Binks and a steady stream of Star Wars Holiday Special references. That’s what all the fans want, right?