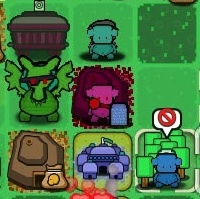 Some of my favorite games in recent memory have been created by very small teams, sometimes as small as just one or two people. Games like Sword & Sworcery and Machinarium and World of Goo. The combination of smaller budgets and smaller teams often makes these games both more unique and more intimate than most big budget productions, which have a tendency to feel very similar to one another. This isn’t a universal trait, of course, but the best indie games do things you haven’t seen before.

You can find these types of experiences on your phone or your PC or even on your game console. But for the most part, you won’t find them on Facebook. And that’s a shame.

Because if there’s one platform in need of some innovation and fresh thinking it’s social games. Even though the quality of games on Facebook is increasing at an incredible pace, with new releases like Monstermind and The Sims Social providing engaging, enjoyable experiences, there’s still a dearth of that thing called innovation. New games, even really good ones, still stick to tried and true methods. The Sims Social, for whatever reason, has farming. It also has collections and energy and requires you to ask your friends for gifts. Monstermind is built off of the city-building craze, but throws in absurdly fun monster battles in for good measure.

These games are good but they aren’t necessarily all that different.

Not every game has to be different, of course, and many popular titles are simply refinements on older concepts. But a game that’s different makes you take notice, and when you play it it sticks with you. And as someone who spends a whole lot of time covering the social games space, there aren’t a whole lot of games that make me take notice.

Hero Generations did. It’s a game about life and death, a game about exploration, and an experience that’s uniquely suited to a social network like Facebook. It’s also made by a one-man indie studio called Heart Shaped Games. Unsurprisingly, the fact that the game is the product of just one passionate person means it’s a game that feels much more personal. It’s a singular, unique vision that doesn’t get bogged down in what everyone else is doing. There’s no pointless farming. There’s no spamming your friends for gifts or items.

“When I think about my favorite games and game companies, the one connecting element between them seems to be that the developers put a lot of themselves into their work, knowingly or unknowingly,” Heart Shaped’s Scott Brodie told me when we talked in August. “So Heart Shaped Games is a way of letting potential players know that, in contrast to games being developed by some of the large companies, a lot of love goes into the games we make.”

And just like the best indie games, that love shows. It helps to make the game feel different from everything else out there.

Last year I attended a talk at the Montreal International Games Summit by Scott Jon Siegel, formerly of Playdom, now a designer at Popcap, where he broached a similar subject: Facebook needs more indie developers (you can check out his presentation here). New and interesting ideas sprout from indie games. They’re riskier. They’re more personal. As part of his talk, Siegel had asked a number of notable indie developers what they thought of social games, and plenty of the responses were that the developers simply didn’t care for them. They didn’t like the types of games coming from companies like Zynga. They’re spammy. They’re manipulative. They’re not fun.

But obviously that doesn’t represent the entire social gaming community. Zynga is easily the biggest developer on Facebook but it doesn’t serve every niche. There are plenty of players who don’t play Zynga games but would play something fresh and new on Facebook.

Indie games can be revolutionary. A strange game like Sword & Sworcery sold a quarter of a million copies on a platform where many people simply play Angry Birds. It didn’t sell because it did what was popular, it sold because it did its own thing, and it did it well. This mentality is largely missing on Facebook.

Hero Generations is the best example I can think of. I wish there were more.

Monday Morning Quarterback is a new weekly editorial series from Gamezebo. Each and every Monday one of our editors tackles a specific issue around the latest trends and news in the world of gaming.

Interview: how Idle Worship will turn Idle Games into the Pixar of social gaming