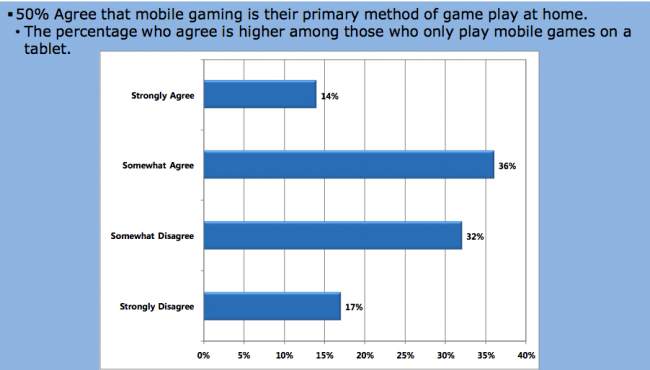 It’s that time of year again – PopCap games has released the numbers to another one of its extensive consumer surveys. This year’s topic centered around mobile gaming habits and was filled out by over 1,000 mobile and tablet consumers. While plenty of the survey simply affirmed what we already know about mobile, some of the survey’s responses more a bit more surprising.

For one, the phrase “mobile gaming” might be an antiquated term. According to PopCap’s survey, 50% of all mobile and tablet gamers agreed that gaming at home was their primary destination for gaming, while “at home on the couch” was the number one most popular place for play. The idea of the traditional mobile gamer being someone who is constantly on the go and seeking short gameplay experiences might no longer be factual.

“We already know that people play mobile games ‘on the go,’ but now we are seeing mobile gamers largely favor their mobile devices for home use.” said Dennis Ryan, VP of Worldwide Publishing at PopCap. “If you add the fact we are seeing a deluge of new gamers coming in through mobile, we believe mobile gaming is invading the last bastion of video game consoles and personal computers: the home.”

While the classic “short burst” games will always be a fundamental staple in the mobile gaming repertoire, this increased at-home usage might very likely be the dawn of mobile devices seeing more and more fully-featured titles. Rather than seeing mobile gaming as a phone-based gaming platform, this shift in user activity could cause developers to see mobile platforms like iOS and Android as powerful handheld gaming consoles. 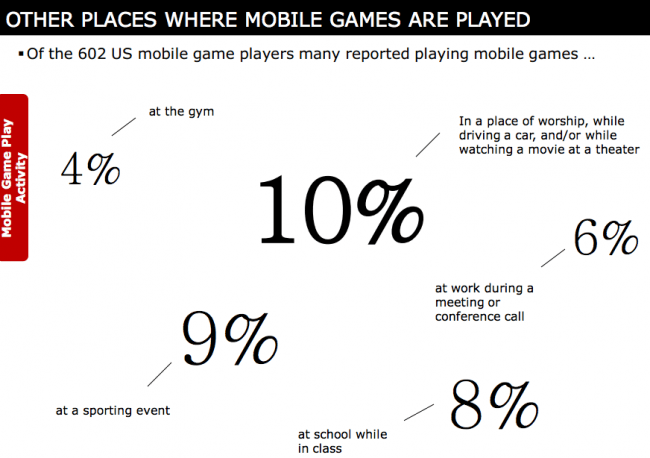 The survey didn’t exclude mobile gaming as an on-the-go activity, however. In fact, gamers have found some strange places to participate in their hobbies: 10% of those surveyed admitted to playing games while driving, while watching a movie, or even in a church. 9% also admitted that they had missed an appointment or other activity due to being distracted by gaming.

It looks like the ability to game on the go is a pretty powerful vice! Interestingly enough, this group of PopCap-named “naughty gamers” has been known to spend more on Apps than the general public. According to the survey, “naughty gamers” aim to spend $20 more this year on mobile games than the average consumer.

Whether developers seek to make their games more appealing to the at-home crowd or try and make addicting mobile experiences to appease mobile phenatics, one thing is for certain: mobile gaming is becoming a huge force that permeates through a gamer’s daily life – both at and away from home.