Mikey Boots is the next game from Mikey Shorts, Mikey Hooks creators 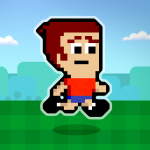 With two critically acclaimed platformers under their belt, it was only a matter of time until they gave us a third. BeaverTap Games, the creators of Mikey Shorts and Mikey Hooks have just released the teaser trailer for their next game, Mikey Boots.

As you can probably guess from the name, Mikey Boots will add some cool new footwear mechanics to all of the running, hooking and sliding you’re used to. Judging from the trailer, this means ROCKET BOOTS.

My apologies for the ‘all caps’ nature of that statement, but you try typing ROCKET BOOTS in lower case. It’s scientifically impossible.

They’re keeping a tight lid on further details right now, but that doesn’t mean that BeaverTap Games doesn’t have more good news to share. Mikey Hooks also launched on Android today. To celebrate this momentous occassion, the game is on sale for 50% off on both Android and iOS.

If you haven’t played Mikey Hooks yet, you should fix that immediately.

What’s the longest the average user plays a mobile game?