Microsoft brings Kinectimals to the App Store… wait, what? 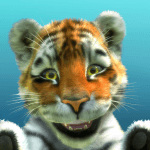 It’s not easy to admit defeat, but with a recent quartet of releases on the App Store, it really seems like Microsoft is trying to tell us something. In the last six days, the big M brought three non-games to the iPhone and iPad – the official My Xbox LIVE app, the Halo: Reach companion app Halo Waypoint, and a gorgeous new rendition of Microsoft OneNote. Now they’ve just debut their first iOS game – a port of the Windows Phone 7 version of Kinectimals. Has Microsoft finally seen the light?

While Windows Phone 7 was unquestionably a platform that had potential, the hardware itself failed to catch on in the way that Android and iPhone have. In fact, a recent Gartner survey claims that while the overall smartphone market is up 42% from last year, Windows Phone sales actually dropped. At the moment, Gartner estimates their market share is at a measly 1.5 – down from 2.7% a year ago.

Which brings us back to the old adage of “if you can’t beat’em, join’em.” And while Microsoft certainly hasn’t thrown in the towel on Windows Phone in any official manner, the recent software push we’re seeing on the iOS App Store can’t help but make us suspect.

But what does this mean for gamers? If Kinectimals is merely the first in a series of Microsoft games to come to iOS, it could mean an awful lot. Not only has Windows Phone 7 seen a ton of great games that have remained exclusive to the system, but this could merely be the start of the doors opening for a variety of Microsoft Games Studios franchises to make their way to iDevices.

Whether things actually go in this direction for Microsoft and the App Store is anybody’s guess – but even if they don’t, my kids will still be delighted to have Kinectimals to play with. Expect our review soon!