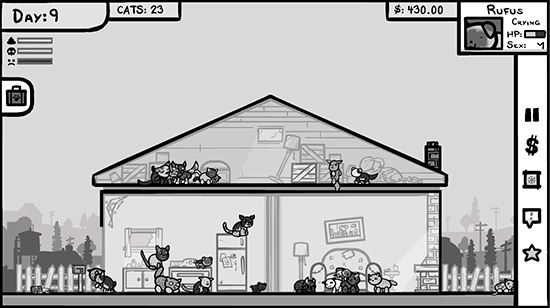 After four months of updates about its soundtrack, platforms, and other such details, Team Meat have finally spilled the beans on the gameplay of Mew-Genics. In short, it’s a “cat lady sim.” In long, it’s something much, much crazier than that.

McMillen revealed all in a blog post on Team Meat’s site, where he was quick to note that Mew-Genics is “a hard game to explain.” To get around that problem, he included an example of how one session with the game played out for him. You can read that here, but I’ll provide an abridged version for those short of time:

McMillen was playing the game with a cat named Puddle. In order to get her, though, he first had to thaw her out of her “Cryo-cube.” He put her in his single-story house, which was also home to a cat named Champ. Puddle was special because she had a unique tail that McMillen believed aided her in winning second place in a cat pageant, and so he wanted to breed her before she got too old.

But Puddle wasn’t the nicest of cats. She had a tendency to kick Champ in the face, which forced McMillen to place Champ away from her in the attic. But the damage was already done: Champ was eating when Puddle was kicking him, and so he now associated food with pain, which caused him to starve.

McMillen later encountered a stray named Goon, who got along much better with Puddle. The two mated, and Puddle ended up pregnant. Unfortunately, Goon was narcoleptic, and so the two kittens Puddle gave birth to inherited that trait. The good news, though, is that one of them also ended up with the unique tail McMillen liked so much.

The two kittens had trouble winning pageants due to their narcolepsy, which is kind of depressing. Even worse, though, is that Goon ended up giving Puddle “feline aids.” McMillen couldn’t afford treatment, so he placed her back in her Cryo-cube with the hopes that he could one day make her better.

Sadly, that day never came. McMillen was arrested by the in-game animal control. 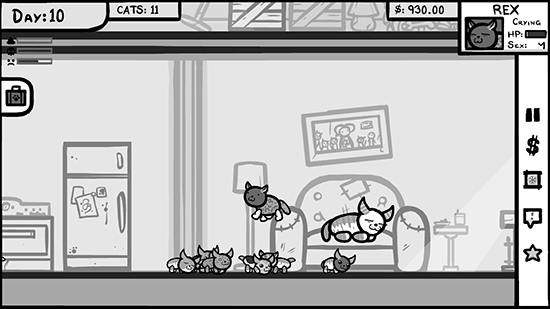 Okay, so that wasn’t as abridged as I wanted it to be, but it’s a complex game! In fact, McMillen expressed his concern that that little anecdote doesn’t totally explain what all is possible in the game. That ought to be remedied in the near future, though, as it sounds like Team Meat will continue with progress updates until it releases. Speaking of, Mew-Genics is expected to launch on Android, iOS, and Steam this year, and possibly even more platforms.