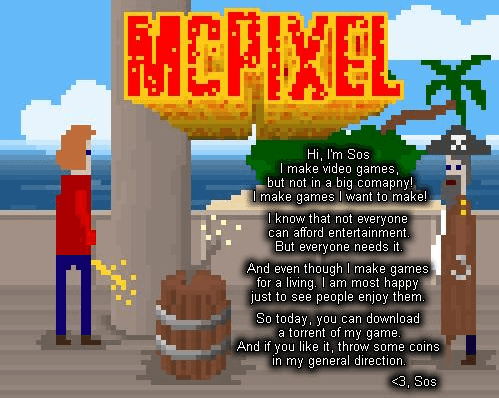 Head over to The Pirate Bay right now for a quick download. No, really, it’s okay. I won’t tell anyone. For that matter, if it’s Polish indie developer Sos Sosowski’s McPixel you’re downloading, you won’t even get in trouble! You see, Sosowski has partnered with the controversial torrent hub to permit people to take a copy of McPixel without paying a cent. No…not permit. Encourage.

DubbedMcPromo, and running for remainder of the weekend (as of this writing), the deal is as follows: by visiting mcpixel.net, you can set your own price for Sosowski’s absurdist point-and-click adventure. While suggestions range from 1 “McBucks” (dollar) to 9001, there is also a custom field which allows you to snag the game free of charge. Sounds like your basic bundle deal, right? Well McPromo takes things a step further, offering you a “.torrent” file for the game, allowing you to use one of many download clients to make the game available for users the world over, on places like – you guessed it – The Pirate Bay.

The whole thing is a radical departure from the standard terms you see in things like Humble Bundle, and a universe apart from the mainstream approach to paying for digital content. Arguably, it goes so far as to represent an approach which endorses pirating content. And that, Sosowski says, is the whole point.

“My view is that deeming piracy as theft and crime is wrong. It is neither. Such views were built [upon] false assumptions.” Assumptions Sosowski has been questioning publicly for some time by doing things like giving away promo codes for McPixel to those who approach him wanting to play, or taking to Reddit to encourage people to find and torrent his game. It’s the latter action that got him noticed by organizers at The Pirate Bay, who encouraged him to take part in their “Promo Bay” program – a front-banner content promotion tool previously reserved for movies and music with the same ethos. McPixel represents the first game – and Sosowski the first game creator – deemed to have the right ethos. And what ethos is that, exactly? In a word, optimism.

“A quick display so far [shows that] McPixel has sold around 300 copies [through McPromo], while the torrent has over 3,000 peers,” Sosowski told us yesterday (numbers have since increased). Yet, far from seeing this is as indicative of public greed, he takes a different angle completely. “[This] shows that people torrent because they have no other means of accessing the content. I believe that all these 3,000 people who downloaded the torrent would gladly purchase the game, for even as little as 1 cent. But I do not allow them to, [instead] restricting my service to PaPal and credit cards.”

Service. That’s the crux here for Sosowski. Whether or not he’s right about every person torrenting his game, he’s of the belief that piracy as an issue is a problem of service provision, not criminal behavior. A fundamental discord between content providers and those seeking the content, stemming from the unwillingness for many to adapt to modern technologies. To his mind, more publishers, developers, and creators need to seek to make obtaining their high quality content for money as easy as it is to snag lower quality versions for free. Or for that matter, need to embrace the idea that people having your content has a long term worth that will bring in money, create loyalty, and harbor feelings that pay your costs back later.

“I would like to se developers and publishers stop openly and violently fighting piracy, and start looking for a solution” insists Sosowski. “DRM and criminalisation are by no means solutions to anything, and such means are an awful display of ignorance.” In this way, he acknowledges that McPromo represents more a symbolic rejection of the blanket idea that  “piracy is wrong!”, and a rebellion against the constraints currently affecting paying gamers in service of that idea.  He doesn’t purport that this method is a catchall answer, but rather an encouragement to think differently about a problem that has – in many cases – been approached antagonistically. And the whole while? He’s ceaselessly optimistic.

“I hope this will change for the better! Me, I am mostly glad that thanks to this, more people can access and play McPixel, and it is really rewarding to see people having fun playing it.”