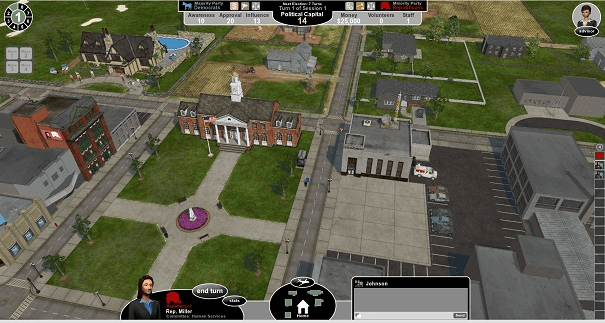 When I was in college, if one of my professors had told me to go back to my dorm room and play a video game for homework, I might have never wanted to graduate so I could just keep on learning through playing great games. But for many college students today, that ultimate gamer’s dream is becoming more and more of a reality, as educators and learning institutions of all levels are recognizing the power that gaming has to teach younger people about difficult concepts and important life skills.

To continue the growing trend of hands-on learning through engagement, McGraw-Hill Education has announced Government in Action, one of the industry’s first 3D online multiplayer educational games geared towards college students. Developed in conjunction with Muzzy Lane, Government in Action lets students assume the role of a U.S. congressperson, and apply real-life concepts they’ve been learning in their American Government course within a simulation setting. In the game, students are tasked with securing the most political capital, and both collaborating and competing with other classmates online in their quest for reelection. In addition to Government in Action, the McGraw-Hill Practice suite also includes experimental learning games Practice Marketing and Practice Operations,for students in marketing and operations management disciplines.

I recently had the chance to conduct an email interview with Matt Busbridge, the director of products and markets for the social sciences at McGraw-Hill Higher Education and product team leader for Government in Action, where I was able to ask him a few questions about the ambitious new project. You can read what Matt had to say about Government in Action below, and if you want to learn a little bit about how the U.S. government works on your own, you won’t even need to enroll in the nearest American Government class to give Government in Action a try!

A free demo of the game can be played right now at www.mhpractice.com, and if you like what you see, you can purchase the full version from the McGraw-Hill store. If only I had a game like this when I was in school!

Gamezebo: Your game features a really neat concept, in which American Government students play the role of U.S. Congress members and try to maximize their Political Capital. Walk me through a typical game year in Government in Action for players seeking re-election to U.S. Congress. What kinds of tasks and challenges can students expect?

Matt Busbridge: Students – who are competing in the game as members of U.S. Congress – build up their political capital by raising their awareness, approval and influence on policy with an ultimate goal of being re-elected. In order to accomplish this, they can propose bills, hire lobbyists, engage national and local media, raise funds from donors, hire staff and volunteers, hold rallies and town-halls, and compete against other students. They have to do all of this while positioning themselves for re-election in a local district which has a competing candidate and a variety of ideological issues. Ultimately, students in American Government courses learn how multiple facets of government work together.

Gamezebo: What has been the overall response to the Government in Action game by American Government course instructors? Did any instructors show signs of resistance towards teaching with a video game aide?

MB: American Government instructors have been asking us for a game like this for a long time and many are already big gamers – we’ve received tremendous support for Government in Action from faculty across the country who look to engage their students in how government works, create more meaningful and rich class discussions and develop a deeper understanding of the course for their students.

Gamezebo: How is the game expected to be incorporated into the curriculum by instructors? Will students play the game together in class? Or will they play it periodically on their own after class, as in a homework assignment or long-term project?

MB: We’ve seen faculty use this in a variety ways: in and out of class, for a week or even for a full semester. It is highly flexible and can work differently depending on the instructor’s preference. We’ve seen improvement in an understanding of government in students who play the game multiple times over the course of the semester because their understanding develops the more they play the game. 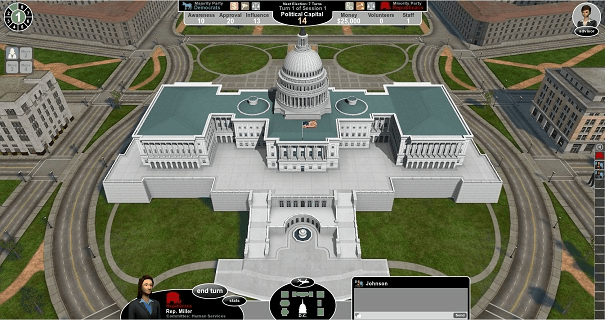 Gamezebo: You mention that one of your goals with Government in Action is to reinforce learning while increasing engagement. What do you think are some other important life skills that young people can learn by playing video games?

MB: The fundamental goal of Government in Action is to develop students’ critical thinking and analysis skills while giving students an understanding of how government works at the same time. Both of these skills are developed playing many different kinds of video games and are important life skills for all of us.

Gamezebo: The MH Practice suite also includes Practice Marketing and Practice Operations for students in other disciplines. What other kinds of educational games can we expect to see from McGraw-Hill Education in the future?

MB: We’ve been very satisfied with the reaction to Government in Action and the other games in the MH Practice suite so far, and we’re currently exploring the possibilities of expanding our suite of Practice Games into multiple course areas – stay tuned! 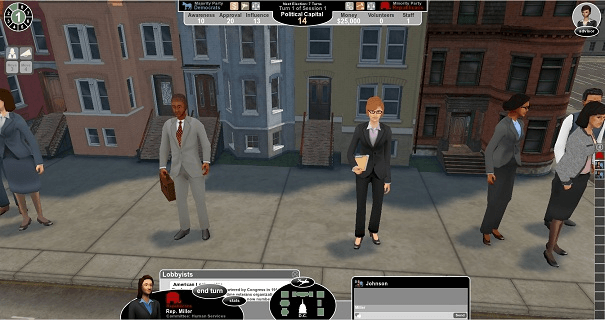 Gamezebo: Is there anything else you’d like the Gamezebo audience to know about Government in Action?

MB: This is our first entry into the market for higher education games, and it’s also a first in the American Government course (which over 750,000 students take each year). We’re excited to engage with the gaming community as our own business continues to evolve and are looking forward to helping students in American Government (and other courses in higher education) succeed through gaming!

Gamezebo: Thanks so much for your time! One final question: since we love talking about games here at Gamezebo, are you a gamer yourself? If so, what are some of your favorite games to play?

MB: Personally, Tiger Woods PGA Tour and NHL are two current favorites but I spent much of my college years playing Hitman and SimCity!

Thanks again to Matt Busbridge and McGraw-Hill Education for their time, and be sure to let us know what you think of Government in Action and higher education gaming in the replies!