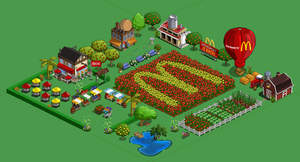 Zynga can now add McDonald’s as an advertising sponsor for FarmVille.

For one day only (today), FarmVille players can inter-act with the McDonald’s farmto earn unique rewards.

While only for one day, with this ad deal, Zynga officially can proclaim itself successful at selling ads. Seriously, McDonalds is the “Big Mac” of ad clients and when this works, they will probably pony up for more. Other advertisers will view McDonalds as a good case study and jump abroad.

It does raise some issues though. I’ve often been amused that millions of people spend their time raising virtual crops on their own family farms, yet eat and buy processed industrialized food every day. The pairing of FarmVille and McDonalds makes sense in that food does come from the farm, but the farm is not the first thing I think of when I think of McDonalds. I think fast food. The fact that you can grow tomatoes and mustard seeds, which implies the two most natural items on the McDonalds menu are ketchup and mustard, does not change the perception.

Other issues are that regardless of Facebook’s rules that you can only be a member if you are 13 or older, I imagine many children play FarmVille on Facebook. I wonder what FCC and marketing to children issues will arise and if we’ll eventually see regulation in advertising in social games as we do on TV.

Finally, if this ad deal with McDonalds goes super swell, this could end up being a double-edged sword for Zynga. The truth is, if you have billions of dollars, it’s easy to create a FarmVille. And McDonalds has billions of dollars to spend on advertising. McDonalds already believes in games as evidenced through its Monopoly promotions. What stops McDonalds from looking at the data and realizing they can create their own social game on Facebook, and own all the data and customers?

Can a McDonalds McCafe social game be released in the future?

Smell this game and buy it

Glu Mobile drops the price on 9 iPhone games to free