Home / News / May the force free with you! Star Wars: The Old Republic goes free-to-play until level 15

May the force free with you! Star Wars: The Old Republic goes free-to-play until level 15 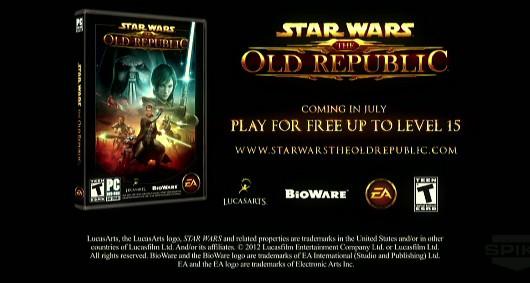 Apologies for the delay on this one. A casualty of the E3 rush, this piece of news got lost in the Gamezebo file folder for a couple of days. Which as we all know in internet time is approximately seven hundred years. Which, coincidentally, is how long you’ll be spending playing Star Wars: The Old Republic now that it’s gone completely free-to-play for the first fifteen levels! See what I did there?

Announced on the fourth at EA’s E3 press conference, the popular MMO’s move to a partial F2P model will be hitting in July, confirmed reps from developer Bioware. And the news couldn’t come any sooner. Despite the fact that Old Republic boasts the most successful player onboarding in history, hitting a million active users faster even than World of Warcraft, its tapering off has become equally storied. Finding players on servers, joining up with others to fight for the Sith and Jedi – all of it has become more difficult in recent weeks and months as the game seems to have failed to scale for consistent growth.

As a result, you see Bioware making a move Blizzard did with WoW after years of the game’s existence only one year into what was supposed to be an Old Republic craze. On the positive side of things, however, the same update is bringing with it an entirely new world – Makeb – and enhancing a universe that is already arguably richer than any available in other major MMOs. Without the need to tie myself to a monthly subscription to get my first taste test, I definitely foresee checking this out in July, and I’d wager we’ll be hearing about a surge for Old Republic due to an influx of MMO skeptics who just can’t resist the nostalgia of Star Wars.

If nothing else, this means that Editor-in-Chief Jim will have more opportunities to get lost in the world that Lucas built. And we all know a happy EiC is the best E3 present of all.

Brawesome celebrates their titles by raising prices… wait, what?