Home / News / Mark of the Old Ones: Fun with Tentacles

Mark of the Old Ones: Fun with Tentacles 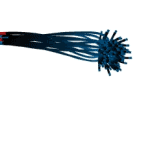 As you can probably guess from the name (assuming you’re well-steeped in literary horror), Mark of the Old Ones is a game that embraces the mythos of H.P. Lovecraft. But after watching the trailer, I’m more inclined to think that the game was inspired by Wacky Wally – the classic wall-crawling octopus that came in a cereal box and lost his stickiness after his third attempt at adventure.

It’s a strange comparison, but bear with me. Or better yet, watch the Mark of the Old Ones Kickstarter video below to see the gameplay in action.

The game utilizes an “inverse kinematics system” (I don’t know what that means and neither do you) to create tentacles for your protagonist that feel and act natural. This is important, because Mark of the Old Ones is all about interacting with the world through these tentacles. You’ll pull and push yourself along the environment as you explore the world around you.

Add to this the ever delightful descriptor “metroidvania” and you’ve got a Kickstarter campaign that can’t help raise my interest. If you can say the same, hop on over to their Kickstarter page and give Mark of the Old Ones a little monetary love.

Blizzard Is Giving Away Their Early Classics

Get Sword of Fargoal for Free, Right Now