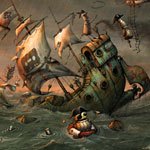 Amanita Design is hoping that the software pirates who played their indie adventure Machinarium illegally will turn out to have a conscience after all. The company has put Machinarium on sale in a promotion it’s calling Machinarium Pirate Amnesty. “Everybody who downloaded our game illegally (for free) has now a chance to redeem himself and get the latest version of the game (Win+Mac+Linux) and it’s fantastic Soundtrack only for $5 (instead of $20),” the company wrote. Even if you didn’t pirate the game, $5 is a great deal for this indie gem so head on over to the game page.

“We released the game DRM free which means it doesn’t include any anti-piracy protection, therefore the game doesn’t bother players with any serial codes or online authentication, but it’s also very easy to copy it,” Amanita continued. “Our estimate from the feedback is that only 5-15% of Machinarium players actually paid for the game. If you decide to buy the game, you can be sure you’ll support directly the developers, not any big publisher or distributor.”