Lumini – the most relaxing game you’ll play this week 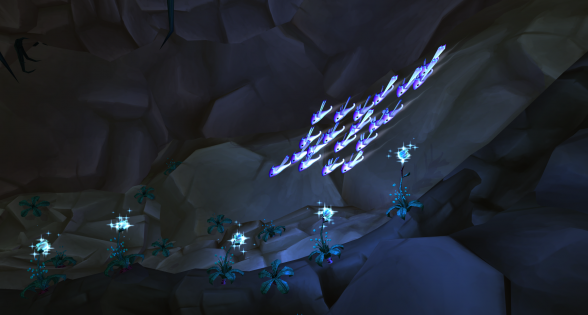 It isn’t often that I call a gameplay experience relaxing. In fact, short of 2013’s InFlux, I am hard-pressed to recall the last time I described a game as relaxing. For a game to be relaxing for me it needs to be easy to play, require minimal controls, and have a smooth soundtrack. But most importantly, it has to be engaging.

I am happy to say that Speelbaars’ Lumini, is all of the above. I played the game’s pre-Alpha demo earlier in the week and, even so early on in the game’s development, it is clear to me that Lumini is well on its way to being the most relaxing game of 2014.

The Lumini demo has players guiding a flock(?) of creatures that resemble flying fish through a sunken cavern. Players familiar with the mobile hit Badland will feel right at home guiding the creatures through the game. But where Badland was full of shadows, sharp objects, and a sense of urgency, Lumini is full of color, rounded corners, and tranquility.

The atmosphere within the game is very serene, even with the presence of a few antagonists. The antagonists are relatively harmless so long as the player keeps their distance and hastily glides away from the larger, hungrier, predators. I did lose a handful of critters at one point, but that was completely because I was looking around at the background instead of paying attention to where I was going.

A unique aspect of Lumini is how the player can split the flock into two separate groups and control either one simultaneously. To get through some ruins, I had to use two groups to push a section of wall in two different locations, in order to get it to move out of the way. The execution was a little clunky, but the overall idea behind it was sound, and I’m sure future builds will iron out the mechanic.

Lumini is projected to release in the second quarter of 2015. Check out the game on Steam Greenlight, and download the pre-Alpha demo from the game’s official website.

Game of the Month: Threes!