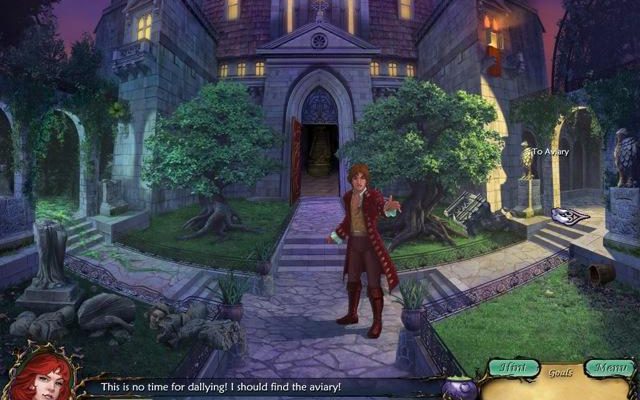 Vampires are hot these days, whether it’s Twilight, True Blood, Vampire Diaries, the bloody list goes on into the endless night. It was only a matter of time before vampires began to suck their teeth into the hidden object adventure genre for casual games as demonstrated in PlayFirst’s recent foray, Love and Death: Bitten!

We spoke with lead producer Solveig Pederson Zarubin and lead designer Helen Chang to find out why vampires are so hot, the details of developing a deeper hidden object game, and all that wild and crazy funny stuff that happens in the PlayFirst offices when they are late at night coding and designing games for us to play.

First, please tell us a little bit about the development team behind Love & Death: Bitten.

The team forged some close relationships over the course of the project. The game industry is such a small world; turns out, many of us have worked together at other companies as well.

Many of the romance-themed casual games coming out are based on actual romance novels, but Love & Death: Bitten has an original story. What were some of the inspirations behind the story, and how did it evolve and develop over time?

Helen: Love and Death: Bitten was a work of love from an amazingly dedicated team here at PlayFirst. The original idea sprung from two women (my friend Dana Nelson, also a designer at PlayFirst, and myself) who were obsessed with the Twilight books. It was a love-hate relationship with the books, but one thing was for sure – we couldn’t stop talking about vampires. We thought to ourselves, hey, what if we could infuse what we love about cheesy, charming ‘dark prince’ type romance into a hidden object game? It seemed only natural to join the two genres together. After the initial concept was approved, Patrick Baggatta and I went on to craft the final story, which took much iteration before the pieces started to fit together. I think we hit our goal of making a high quality hidden object adventure game with a sexy, dark, thrilling love story.

Q: Damon really isn’t a nice guy when we first meet him. What steps did you take to make sure the attraction between Damon and Victoria was convincing?

Helen:Tension and transformation. The two main characters had to start out at odds with one another to make things interesting. Then of course we wanted to see the characters develop and change as the story progresses. Victoria learns that Damon, despite his arrogant exterior, actually has had quite a tragic past. Her feelings toward him soften as she explores the castle and rummages through his things (that’s you doing the hidden object searches!). Damon, on the other hand, at first discounts Victoria as a mere human girl, but her intelligence and resourcefulness actually end up freeing him from his curse. I mean, the player solves some crazy puzzles that no average human being could figure out, don’t you think? 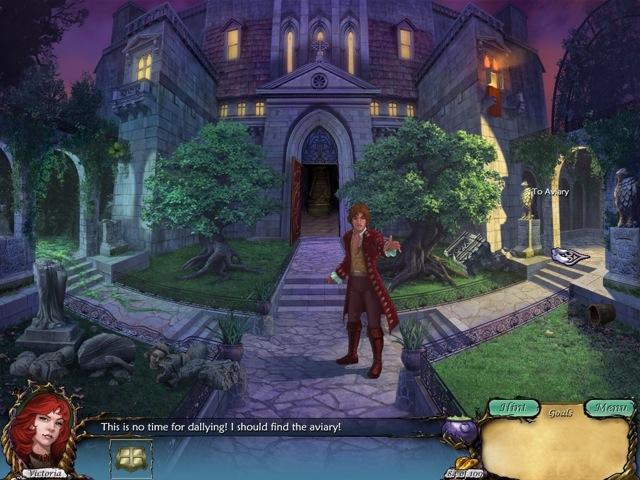 Why do you think vampires continue to be so popular in pop culture?

Helen: I think it comes down to the romance, to be honest. The allure comes from gorgeous teenage vampires, not dusty old Count Dracula. Vampires are just another skin for the strong, forbidden-love male figure that can protect the female protagonist.

Almost all hidden object/adventure games these days have skippable mini-games. What do you think about this trend?

Solveig: Helen and I agree – we think it’s great. She’s a convert to the hidden object/adventure genre; she loves the adventure part best, and appreciates the option to skip a puzzle. Same with rechargeable hint buttons. We know that many in our audience have said on the Gamezebo, PlayFirst, and Big Fish Games forums that they will not buy games without skip buttons for the puzzles or mini-games. Skip buttons put control in the hands of our players; this is a positive trend. 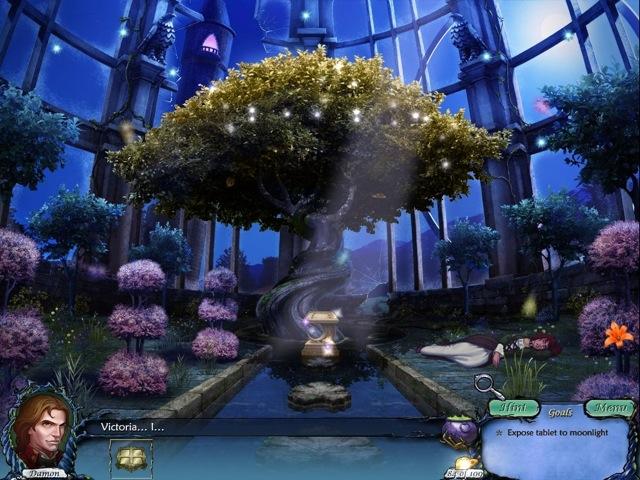 Solveig:We spent so much time together over the course of the game that we have more stories to tell than will fit on this interview!

In our first “InsidePlayFirst” Webisode, you can see artist Jeff Troupe working on the raven featured in Bitten’s hidden object scenes (he’s at 0:44). The raven was a relatively new improvement to the game, replacing a “list envelope” asset that was in the game for much of the project. We were pretty excited to see it working and animating.

Plus, see the story of the “focus hat” in Webisode #2, as told by Helen and Chuck Eyler, our art director. As you can see in the video, we spent a lot of time in our cubes: going over art feedback, playing the game, talking to the rest of the team sitting nearby (Paul Wilkinson, Jim Brooks, Jack Balingit, Patrick Baggatta, Maryann Klingman, Jeff Troupe, Barry Prioste, and Damien Mammoliti), and Skyping with the art houses overseas. I loved the guitar serenades that Helen mentions below, as well.

Helen:Yes, we certainly had a lot of laughs. I remember when we prototyped an early version of Odette’s Journal using Hershey’s kisses on a table. It was fun to eat chocolate and be working at the same time. I also remember late nights when Chuck would pull out his acoustic guitar (sometimes joined by Kenny Shea Dinkin

and Mike White) and serenade us with jams while working.

It was awesome to have a live concert happening behind my chair, and helped keep things calm and chill while we worked. There were some dramatic moments also, which are funny in retrospect.

Patrick (Designer) and I usually agree about 99% of things, and I remember one night when we had finally found something to disagree vehemently about. We were practically shouting at each other across our dividers, and Kenny (our department director) came over with the most frightened look on his face, asking if everything was okay. It all ended up fine (we went with my design), but we still look back on that moment and laugh about it.

What about challenges? Did you hit any major roadblocks along the way? If so, how were they dealt with?

Solveig & Helen: This game was the first hidden object adventure that the PlayFirst studio developed internally.It was also a new IP and new brand: we had to figure out who Victoria, Damon, Celeste, and Odette were, what the central storyline was, and how to weave the gameplay seamlessly throughout. And on top of that, our engineering team built a new hidden object/adventure engine!

There were several challenges. Keeping a large team moving forward toward a ship date is always a challenge on the production side. Directing everyone toward a final date, especially with so many stakeholders who care deeply about the project, was not always easy.See above stories for some examples! Communication and a passionate team who care about the product really helped surmount many of these challenges in the end.

In addition, we had lots of changes in direction along the way. For example, we wrote and re-wrote the intro movie script. The image of the “metamap” also mutated – from being a “time tracker” for the game’s days, to tracking events as bubbles in the cauldron, and then to Odette’s Journal, its final rendition. The Mayor of the village, Victoria’s Uncle, was originally her father, and he was supposed to die in the first few minutes of the game. One crazy idea for the ending even involved emergency heart surgery!

Love & Death: Bitten is the first game in PlayFirst’s new “Curl up with a Good Game” brand. Please tell us more about this brand and the long-term plans PlayFirst has for it.

Solveig: As an avid reader, I love this branding for Love and Death: Bitten. We know our game-playing audience craves a good story as well as exciting game play mechanics. Players immerse themselves within the game stories, just as they do in a favorite novel. Love & Death: Bittenis the perfect blend of storytelling and game play that captures the essence of ourCurl Up with a Good Gamecollection.

Solveig & Helen: Before our time is up, we’d like to thank a bunch of people. Thank you to everyone in thePlayFirstfamily who contributed to the game’s success (that’s pretty much the whole company). To all the co-workers at the lunch table who had to endure us girls jabbering nonstop, every day, about vampire romance, thanks for only rolling your eyes and not strangling us, even though we know you wanted to. For Guy Romhild, our quality assurance lead – we’re very happy that our vampires do not sparkle!

A huge thank you to our fans, thank you! You guys are the reason why we love making great games. It was truly an honor and a pleasure to make Love and Death: Bitten for you. Both of us (and the entire team) find it very satisfying to read the comments on online game forums. Thanks especially for the early buzz; we can’t believe the number of postings in the wee hours of the morning on launch day!

We grin when we see players gush about their favorite parts, because that’s exactly how we still feel about this game, too. We’re also keeping track of all the comments (especially regarding the ending) as we think about a sequel!

As for what happens to Victoria and Damon, we’re not quite sure. I guess there would have to be a sequel, wouldn’t there? We’re not saying there will be a sequel, but If there were,we wonder what would be in store… What are your theories?

[Editor’s Note, Joel the editor that is: Bring on the wolfman!]

Solveig has over 12 years experience in game production: from educational software to The Sims 2, to casual games. She enjoys bringing talented people together and guiding them to ship high quality games that players (hopefully!) will love. Most recently, she has been a Producer at PlayFirst for almost four years, working on such games as Wandering Willows and Diner Dash: Hometown Hero.