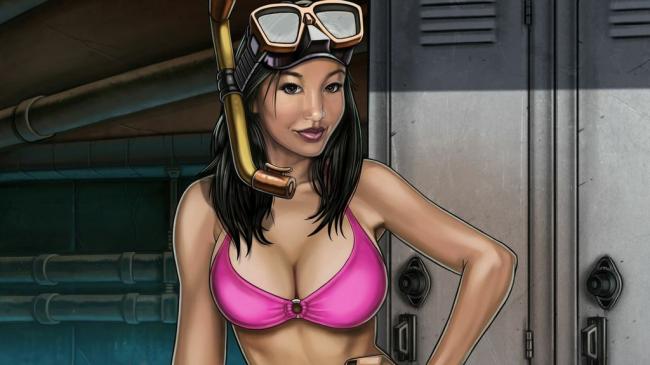 After a long and lonely dry spell, the original longue lizard Larry Laffer is back on the dating scene, thanks to his legions of seductive Kickstarter fans. Today we have some exciting information about a new piece of content that’s being added to the remake of Larry’s first dance with love, in the upcoming Leisure Suit Larry: Reloaded. Based on the many votes from the project’s Kickstarter backers, fans of the series have chosen Jasmine to be incorporated into the game as a new woman in Larry’s luxurious love life.

Let me tell you a little bit about Jasmine, who in her mid-20s will be the youngest of all of Larry’s love interests. After graduating college with a double major in Marine Biology and Interpretive Dance, Jasmine decided to combine her two talents and begin a career as a “mermaid” at Caesar’s Palace, where she swims in an enormous aquarium alongside the casino’s teenage sperm whale, Mr. Wiggles. I can only imagine the number of dirty jokes and innuendos that will come from this intriguing new character and her work situation.

Leisure Suit Larry: Reloaded is said to be filled with expanded versions of the original game’s puzzles, and the trademark gameplay, women, and humorous dialogue that have become synonymous with the iconic series. We also now have official confirmation of the game’s release date and pricing tiers. Larry is set to make his triumphant return on May 31, and the game will cost $19.99 on PC, Mac and Linux platforms, and $9.99 on iOS and Android.

Gamezebo launches the Name Your Own Price Bundle