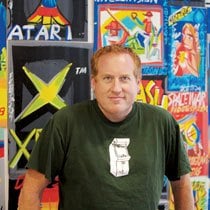 You may not know who Seamus Blackley is, but odds are that you know his work. The man’s known for his involvement with Ultima Underworld, System Shock, and Flight Unlimited. He also helped create a little something called the Xbox. Now Blackley is returning to video game development, but this time he’s not developing a game for the PC or home consoles — he’s going to make titles for the iPad.

Here’s where things get really interesting: Blackley is helming a new development studio in L.A. that is made up of some of the biggest video game developers from the Atari era. In fact, a lot of these developers probably aren’t all that familiar to you, but these folks were involved in iconic games like (to name a few) Asteroids, Missile Command, and Battlezone.

The studio, Innovative Leisure, came together thanks to Van Burnham, who was writing a book called Supercade: A Visual History of the Video Game Age 1971-1984. While she was researching the book, she wound up building friendships with several of the people who helped establish several of Atari’s iconic coin-op games. Of course, many of these men had maintained close friendships between one another, as well, and Burnham and Blackley became inspired by the arcade-like nature of the iOS market.

“This is like the new arcade,” Burnham told Gamasutra.”The whole dynamic of this business and the dynamic of the gameplay. It’s just like the arcade era, except on this amazing new platform. Seamus said, ‘Let’s talk to the guys and get the band back together to see if they want to make games for this platform.'”

Innovative Leisure is planning to publish its iPad titles with THQ. That may seem like a risky venture, seeing as how the past few days have been dominated with news of the company making worldwide layoffs and pay cuts. However, according to Blackley, “[THQ is] hanging tough with us, which is awesome. I love a comeback, a struggle.”

At the moment, it’s not clear when Innovative Leisure will put out its first game. Blackley says sometime in the late summer or Fall is a likely time to expect content from the studio.