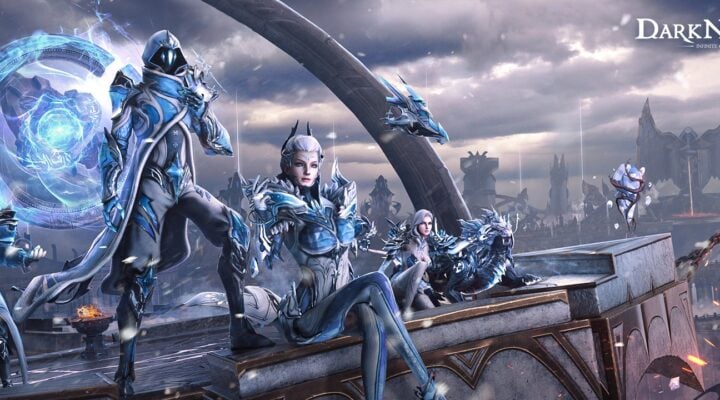 When somebody tells us to “hack the evil, slash the dark”, we sit up and take notice.

That’s the tagline for Dark Nemesis, an epic 3D MMORPG set in a dark fantasy multiverse where the forces of good and evil are at war.

Following a highly successful pre-registration campaign that saw the game attracting more than 2 million registrations, it’s out now on iOS and Android.

Developed by Nuverse, this eagerly anticipated follow-up to Legends of Discord – Furious Wings sees you jumping between parallel dimensions and visiting mysterious worlds in your quest to hack and slash a stunning array of evil monsters.

Not only does the game feature music from World of Warcraft and Diablo III composer Neal Acree, but it looks amazing, too, with some highly atmospheric 3D visuals.

On top of all that, it boasts a compelling pan-dimensional backstory, and all the modes and features you’ve come to expect from a top-tier mobile RPG.

And you can get your Dark Nemesis career off to a flying start right now with a range of OB rewards.

By taking part in the new server events, which will run for the first 14 days after Dark Nemesis launches, you’ll be able to earn a free Sphinx, free A+ Symphony Wings, a free A+ Imp Companion, endless free diamonds, and more. All you have to do is show up.

Story-wise, Dark Nemesis casts you as a multi-dimensional Peacekeeper. The multiverse is under threat from the Raven Church, and you’ve got to lead the Pilgrims to safety, escort the Crystal of Light, and search for the legendary land of Lux Aeterna.

As well as the campaign more there’s a PvE Bounty mode, which sees you going up against bosses in different worlds.

Then there’s the PvP Battleground, where you’ll join battles against other players in limited time Battle Royale extravaganzas. Or you can take a more cooperative approach, building the strongest possible guild in the GvG Battleground.

There are four different classes to choose from in Dark Nemesis, including Warrior, Gunslinger, Assassin, and Mage. Naturally, they all have their own unique strengths, weaknesses, and skills.

You can augment their natural abilities with a variety of weapons and equipment items, and there’s an all-new Spirit system to aid your progress further.

A Spirit in Dark Nemesis is both a mount and a weapon. You can increase your movement speed by keeping your Spirit in its original form before turning it into a powerful weapon when the fighting starts. Each class has its own Spirit weapon form.

On top of all that, there are Wings, Companions, and Costumes to collect and equip. Basically, everything you’d expect to find in a AAA mobile MMORPG is here, and more.

To see Dark Nemesis in action, just head on over to the game’s official YouTube page, where you’ll find a ton of trailers and videos showcasing some seriously impressive graphics and gameplay.

Or you can download it for free right now on the Google Play Store or the App Store – just click here.