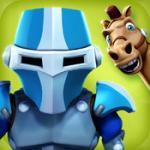 “The game mode lets the player make his own way through a randomly generated kingdom full of dangers and riches,” David Hagemann explained to Gamezebo. “Like the name implies, it is heavily inspired by rogue-like games… Its intention is to combine elements that you might know from these games with the elements of Last Knight, the result is something even more intense than most rogue-likes since there is no health at all and perma-death is always just a split second away.”

Last Knight has players mounted atop a horse, charging through various Medieval environments. Players must dodge obstacles and successfully out-joust any opponents who challenge them. Apart from dispatching opponents, the lance can be used to clear away enemies, and topple trees over to create makeshift bridges. Gamezebo’s review of the mobile original back in 2012 earned a near-perfect score.

Last Knight is currently available from the game’s official website, for $5.99. Buyers who pick the game up from the website will also receive a Steam key, once they become available. Last Knight will release on Steam Early Access on March 25th.

The #FirstTweet of your favorite game developers