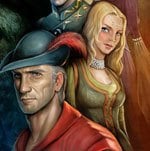 The wait is over for the free game inspired by Sierra’s legendary King’s Quest series, which captured the hearts of adventure game fans during the 1980s and 90s. Phoenix Online Studios has announced that The Silver Lining, an ambitious fan project almost a decade in the making, will debut on July 10 with Episode 1: What is Decreed Must Be.

In The Silver Lining, players will assume the role of King Graham as he sets out on a quest to save his children, Rosella and Alexander, from a mysterious curse. The episodes will be released as free downloads from www.tsl-game.com.

For a while it was doubtful that the game would ever see the light of day. After working on the project for eight years, Phoenix Online Studios was served a cease and desist order by Activision, who acquired the King’s Quest license when they merged with Vivendi (the previous license holders).

The latest news release from Phoenix Online Studios, however, says that they and Activision “have worked together over the last few months to build a relationship that will enable The Silver Lining to be freely distributed to its eager fans.”